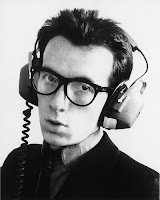 "Spectacle: Elvis Costello With . . .," which will be executive produced by Elton John, will also air on CTV in Canada and Channel 4 in the U.K.

The series will feature everything from intimate one-on-ones with legendary performers and notable newcomers to thematic panel discussions, with a variety of performance elements, Sundance said.
Posted by Dave Splash