Vampire Weekend on SNL this weekend 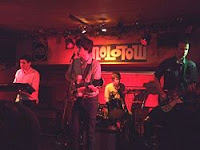 So, not only has Vampire Weekend landed on the cover of Spin magazine for March, they are the musical guest for Saturday Night Live this weekend with Amy Adams.

Not bad for a band from New York who just formed in 2006.

I've listened to their debut album. It's not bad by any stretch. However, I can't help but think of not only Talking Heads, but Clap Your Hands Say Yeah. The Web site I review for gives me about five to ten CDs a month from indie bands. If Vampire Weekend were to fall in that bin and no press hype were associated with them, I would probably give their album a strong 'B' - good CD, but nothing special that stands out.

The old, crusty part of me thinks a band needs to do a great share of due paying before landing on the cover of Spin or being on SNL. But as readership declines for Spin and viewers continue to turn away from conventional TV, you have to strike while the iron is hot to borrow from the cliche.

Speaking of declines, album sales have been going south for a long time. That's sad news for everyone from record store clerks to bands, but declining sales also creates some interesting happenings on the Billboard charts. Such as seeing a soundtrack (Juno) with Cat Power, Velvet Underground and Sonic Youth comfortably remain in the top ten for more than a month against such corporate mainstays as Hannah Montana and the new Janet Jackson album. And seeing the soundtrack of Once also land in the top ten and Radiohead's In Rainbows, an album that pretty much was available free, enjoyed a one-month run in the Top 10 - that kind of shit restores at least a glimmer of faith in popular music.
Posted by Dave Splash

Email ThisBlogThis!Share to TwitterShare to FacebookShare to Pinterest
Labels: Once, Radiohead, Vampire Weekend

Vampire Weekend is the indie rock version of Paul Simon's "Graceland" album. Am I right?