Tomorrow Night's 'Jericho' Will Be The Last One Ever 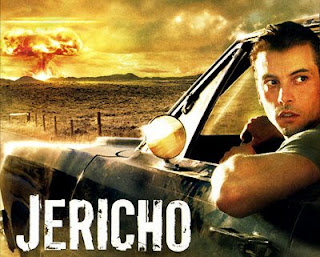 Once again, network television has let me down. I finally find a show that I like, and the network cancels it.

For the second time in as many years, Jericho has been canceled - this time for good. I'm telling you, friends, if you have never seen this show, you do not know what you're missing. And, unless you buy the show on DVD, you never will.

To me, the show was like 24 without the technology. Let me explain that a bit. Both shows deal with terrorism being inflicted upon America. Where 24 focuses on law enforcement and high tech means of tracking terrorists, Jericho is about the after effects of a multi-strike nuclear attack on ordinary Americans. After 23 US cities are destroyed, the federal government collapsed, leaving the millions of survivors to fend for themselves in a new, lawless world. Communications are limited, almost non existent. Same with supplies. Life in America begins to resemble the Wild West again.

When everything you once knew is gone, it can really test a person. That was the magic of Jericho. It attempted not only to show what life would be like in such a situation, but that some people would handle the situation much better than others. Jericho, the city, did okay. It stockpiled its food and fuel reserves, set up a citywide rationing system, and even took in "refugees" from other cities. A neighboring city, New Bern, did not do as well. It descended into anarchy and violence, and eventually tried to start a war with Jericho. 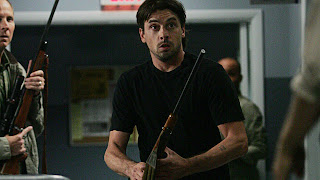 Like 24, there was an element of conspiracy in Jericho. Without giving away too many plot lines to those who still may watch it, the conspiracy involved who actually attacked the US with those nuclear bombs. Everyone assumed it was either North Korea or Iran, and months after the initial attack, the weakened US government launched nuclear strikes against them. Robert Hawkins, who moved to Jericho two days before the attacks, knows those two countries had nothing to do with it.

Hawkins may or may not have been a CIA or FBI agent. He had numerous fake IDs, food supplies that could last years, boat loads of cash, and access to satellites when 99% of all communication had been destroyed. It was almost like he knew the attacks were coming. The mystery of Hawkins is partially explained, but he remains a confusing character. He is the closest thing to a Jack Bauer that this show has.

As the show wraps up tomorrow night, we should learn the entire story about Hawkins and about the shadowy group calling itself Cheyenne. The Cheyenne government and Jennings & Rall (a Haliburton type of contractor with a private army) control about 2/3 of the country, while all states east of the Mississippi are controlled by remnants of the old federal government. Texas remains independent, but is considering joining up with Cheyenne.

Jennings & Rall are now the sole suppliers of all goods & services in the new, Allied States of America. Local businesses are forced to buy all supplies from J&R, told what price they can sell the goods for, and are subject to unannounced inspections to make sure they are not dealing in contraband. J&R's military wing, Ravenwood, enforce this monopoly with brutality, and are accountable to no one. If you defy Ravenwood, your city is declared an insurgency, and the ASA military comes in full force.

It all ends tomorrow. The conspiracy, the terror, the triumph, the revolution? It's heavy stuff, and requires a decent knowledge of the situation leading up the US Revolutionary War to fully grasp the context. The show's producers filmed two separate endings - one if the show were to continue to season 3, and the other if it didn't. However, they have stated that the ending will leave open the possibility of a return on another network (Sci-Fi channel maybe). I certainly hope that is what happens. Jericho was too good to die this early.
Posted by Dave Splash

Damn, that is bad news. I love that show.

Hopefully, Sci Fi channel or some other channel will pick it up, but I doubt it. Apparently, it is very expensive to make.