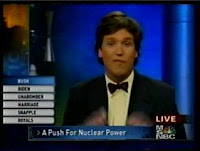 America's least favorite right-wing TV pundit, Tucker Carlson, will be show-less after this week. His weeknight show, Tucker, has been canceled. Can't say that this is somehow a surprise, as his ratings have been in single digits since the show started (back when it was called The Situation with Tucker Carlson).

Carlson is not being fired from MSNBC (because, lord knows we don't have enough conservative election "analysts" in the media). He will stay on the network as an election correspondent through the 2008 elections. Lucky us.

UPDATE: According to Huffington Post, David Gregory will be taking over the Tucker time slot.
Posted by Dave Splash