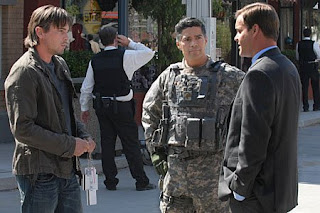 My new favorite show, Jericho, is on tonight and I can't wait. Last week, it looked as though Maj. Beck realized that the new Cheyenne government was not all its cracked up to be, and he asked for Hawkins' help in tracking down Sarah Mason (who we all know is dead because Hawkins killed her).

Military contractors, Ravenwood, have set up shop in Jericho to "administer" the town for the Cheyenne government. Jake revealed the reason why he is so fearful of Ravenwood and its parent company, Jennings & Rall -- he used to work for them as a convoy driver in Iraq. The man assigned to run the town for Ravenwood is the same man responsible for the murders in Rock Ridge (I think that was the name of the town), and who was prevented from entering Jericho last season despite claiming a government mandate for supplies. The guy has a serious history with Jericho, and it's all negative.

When Jake mentioned he was about to do something that could cause him to lose his sheriff's badge, he was dissuaded from doing so by Hawkins who still needs a man on the inside to see what Maj. Beck is up to. Jake reluctantly agreed.

After the incident last week with the antidote for the Hudson River virus, more and more townspeople have became skeptical of both J&R and Ravenwood. My questions for this week are: Who was on the other end of the phone call that Hawkins made after finding the number embedded in that military fax? Is Major Beck someone who can be trusted, or is he "playing" Hawkins because he questions his credentials as an FBI agent? Is Beck skeptical enough of Cheyenne to follow Hawkins wherever it may lead? Beck did send help to that small Missouri town suffering from the HR virus, despite reciting the "official" cover story that the virus had been stopped at the Mississippi River. What exactly is his agenda?

A lot of questions regarding Beck need to be answered tonight. I, for one, will be glued to that set at 9 PM tonight to see if any of them get answered.
Posted by Dave Splash