The Lemonheads Get Expanded 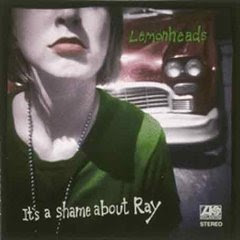 The Lemonheads' classic 1992 album, It's a Shame About Ray, will get the re-issue treatment from Rhino Records this month. The expanded CD/DVD edition of the album will be released March 25. The audio portion can be purchased separately through places like itunes, but to get the full package, you need to actually go to a record store.

I have been a Lemonheads fan since about 1990 when I heard their cover of Suzanne Vega's "Luka." The Shame record, was the band's second for a major label, and featured a poppier, more acoustic-based sound. Juliana Hatfield played bass and sang on the album, as well.

Many people consider Shame to be the best Lemonheads record. I'm not sure if it's the "best" but it is quite great. The band's cover of Simon & Garfunkel's "Mrs. Robinson" became a hit at the time.
Posted by Dave Splash

Email ThisBlogThis!Share to TwitterShare to FacebookShare to Pinterest
Labels: Music, The Lemonheads