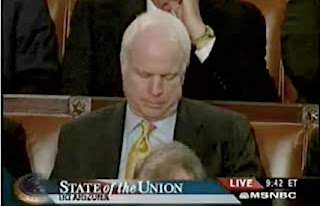 It seems strange (well not strange so much as biased) that while the media is repeatedly asking Barack Obama to denounce controversial Nation of Islam leader Louis Farrakhan after he endorsed Obama, it is completely silent about an anti-Catholic, anti-semitic minister who endorsed McCain.

While Obama has "denounced and rejected" the support and the statements of Farrakhan, McCain gleefully accepted the support from Rev. John Hagee. Here is a small sample of things the good Reverend (and good friend of John McCain) has said:

On Jews: "It was the disobedience and rebellion of the Jews, God's chosen people, to their covenantal responsibility to serve only the one true God, Jehovah, that gave rise to the opposition and persecution that they experienced beginning in Canaan and continuing to this very day. How utterly repulsive, insulting, and heartbreaking to God for His chosen people to credit idols with bringing blessings He had showered upon the chosen people. Their own rebellion had birthed the seed of anti-Semitism that would arise and bring destruction to them for centuries to come.... it rises from the judgment of God upon his rebellious chosen people."

On Catholicism: "The Great Whore" "apostate church" "anti-Christ" "false cult system" "...clear record of history linking Adolf Hitler and the Roman Catholic Church in a conspiracy to exterminate the Jews" The ultra-Conservative Catholic League has asked McCain to denounce and reject Hagee, but McCain refuses. Here is a video where Hagee expands on his theory about Catholics:

"I am very proud to have Pastor John Hagee’s support." - John McCain

On Muslims: "all Muslims have a mandate to kill Christians and Jews"

Just looking for a little consistency here. If Obama is expected to denounce Farrakhan 10 times a day, can someone in the media please ask if McCain supports or rejects the views espoused by Hagee?

Glenn Greenwald has an article about this at Salon.
-----------------------
UPDATE: McCain released a thoroughly weak statement regarding Hagee that neither "rejects or denounces" (the standard for Democrats) the bigot. I'll bet you $50 he is NEVER asked about this again, despite Obama being asked about Farrakhan 50 times a day.
Posted by Dave Splash

Great post. This is really something the Left needs to bring up.

And bring it up over and over because despite Obama's continual rejection of Farrakhan, the right keeps "asking" why he won't. The right is so fundamentally dishonest, it just makes me sick.