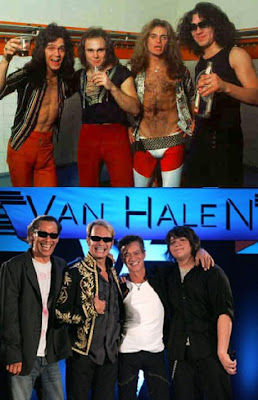 I've been waiting for this day for a long time, my friends. Van Halen with David Lee Roth in concert. I did see the original Van Halen back in 1984 when I was a youngin', but I can barely remember the show.

Say what you will about VH, but I will forever stand up for the original line-up of this band. They were one of the most original and innovative hard rock bands of all time. I never got into the "Van Hagar" era, so to me, they ended in 1985. It's nice to see them back. Strange how bassist Michael Anthony was not invited back, but I imagine Eddie's son, Wolfgang, will more than suffice. I doubt they'd put him on stage if he couldn't hack it with his genius dad and his uncle.

Not much more I can say about the show. I am not going to attempt to change your opinion on the band if you don't like them. I don't care. But I will be re-living a part of my youth tonight, so if you have something negative to say...keep it to yourself.
Posted by Dave Splash

Dude, I am very jealous. A couple guys at work saw them in Seattle and loved it.

It was a fun show. I was just excited to see Roth back in the mix. He is the epitome of the rock n roll frontman, and is so necessary to a band like Van Halen.

I gotta give Dave Lee Roth credit...it looks like he's taken good care of himself all these many long years.