Super Tuesday Settled Nothing - On To Nebraska and Washington! 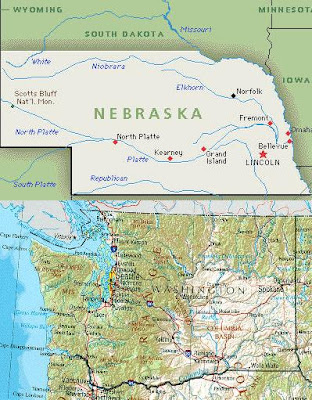 So, we still don't have a nominee in either party since "Super Tuesday" was kind of a wash (results here). Obama did better than expected in states like Connecticut, Georgia, and Missouri, but Clinton took California, Massachusetts (so much for the power of the Kennedy endorsement), Tennessee, Arizona, and her former home state of Arkansas. With the Democratic system of awarding of delegates in a proportional manner, the two candidates are practically tied in terms of delegates (with a slight edge to Clinton). This means that post-Super Tuesday states will actually have a say in the nominating process for the first time in what seems like forever.

This upcoming week will have two caucuses and one primary. I am fortunate enough to live in one of those caucus states. Someone should get a medal in the Nebraska Democratic Party for setting up the state's first ever caucus. It probably seemed like a silly idea at the time; I mean, does Nebraska even have Democrats? Yes, we do. And now, voting in a party primary is actually more than a mere exercise as it has been my entire voting life. The Republicans are sticking with a May primary.

Nebraska joins Washington in having a caucus this Saturday, February 9. Maine has a primary on Sunday. With only three states up for grabs this week, we should get a fair amount of attention from the candidates. Barack Obama has announced he will be in Omaha on Thursday (Bright Eyes will headline a separate rally later that evening at Slowdown - tickets are already sold out), and Sen. Dick Durbin was here last Sunday on his behalf.

What about Hillary Clinton? I think she needs to make some kind of effort. When Bill Clinton was president, Nebraska was the only state in the Union that he did not visit. The only one. If she was smart (and we know she is), she should make an appearance here or at least send someone like Chelsea Clinton or Evan Bayh. Anecdotally, I have found that there are still a number of undecided Dems in Nebraska, and an appearance from the candidate could go a long way. 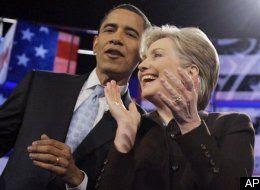 Personally, I am beginning to lean towards Obama. Both Clinton and Obama are practically the same on domestic issues. I think they are similar on most international issues as well. The real difference, of course, is the Iraq War. I am still unsatisfied with Hillary's explanation for her vote to authorize the war. I had no access to any secret intelligence or anything like that, and I don't have an advanced degree in international relations, but I could still tell that the Bush Administration's case for war was bullshit. I have to believe that Hillary knew that as well. Half of the Democrats in the Senate voted against it, and Hillary should have been on that half. But, she wasn't. She didn't want to risk being on the wrong side of a popular war (which it was at that time), so she made a calculation. It was the wrong one.

But, you know, so did Joe Biden, Chris Dodd, and John Edwards. Edwards has now done a 180, and acknowledged that it was the wrong choice. Biden (who was my preferred candidate at one time) and Clinton now argue that it was the incompetent execution of the war by the Bush Administration that was the problem - not the idea of invading and occupying Iraq (a country that had nothing to do with 9/11/01 and was not a threat to the US in any way). Why can't it be both? The administration was completely incompetent, did a horrible job, and is slowly destroying our military readiness -- Donald Rumsfeld should be brought up on charges. But none of this could have taken place without the support of the Congress. We should never have gone in!

But elections are about the future, not the past. If Hillary Clinton is right on almost every other issue, should I hold this one (albeit a huge one) against her? While both candidates talk about bringing the troops home, neither Obama nor Clinton would definitively say that US troops would be out of Iraq completely by the end of their first term. So, looking forward, they are the same on that major issue, as well. Obama had better judgment in 2002, but the two seem to be exercising the same judgments looking toward the future.

I guess it really does come down to electability. Hillary Clinton will galvanize the opposition, and liven up their comatose voters. It will be more partisan warfare, and the continuation of the demonization of one's political opponents. But do you really expect the wingut base of the GOP to just sit back and let Obama coast into the White House? Of course, not. They have already started their campaign to damage him with their peddling of the "Obama is a jihadist" lie. They have attacked his church as being in league with Louis Farrakhan (ignoring the fact that Farrakhan is a Muslim), they have fabricated a story about Obama refusing to do something involving the National Anthem (I'm not quite sure what the accusation really is), and they continue to spit out his middle name as though it were the F-word. It will be tough either way. I am confident that Hillary Clinton can withstand it and fight back. But can Obama?

Will Obama's quest for "Obamaicans" (translation - Obama Republicans) make him unwilling to fight back against the best organized, best funded political hit team in the history of the world - the 21st century Republican party? I sincerely hope not. Take a look at what these guys will do to one of their own (McCain), and then imagine it 100x worse against a young, African-American man with a name like Barack Obama.

I will have this thing settled in my mind before caucus time obviously. I am just excited to finally be part of the decision. This really is unprecedented in my lifetime. Bottom line, though, is that whoever ends up the nominee for the Democrats, I will support him or her. There is no acceptable alternative on the other side - just a third Bush term. We can't take anymore of that.
Posted by Dave Splash

I'm also leaning toward Obama. The conservatives are coming right out and saying the only thing that can save them in November is Hillary hatred.

When Edwards dropped out, I pretty much lost interest. As you said, Obama and Clinton are almost on the same page as far as domestic issues go.