Remember: A Vote For McCain Is a Vote Against Evolution 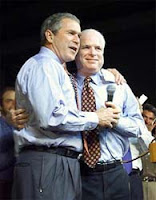 You might believe if you watch television news that John McCain is a "straight talker" and not a pandering wingnut, but you'd be wrong. McCain has been on the record for years as a supporter of mandatory teaching of creationism (aka "intelligent decision) in public schools. "McCain told the Star that, like Bush, he believes 'all points of view' should be available to students studying the origins of mankind."

And by "all points of view" he means violating the Constitutional separation between church and state and forcing children to study religion rather than science -- in science class! Remember, McCain apologized to the religious right for not being duly obedient to their dogma. Straight talk, indeed.
Posted by Dave Splash