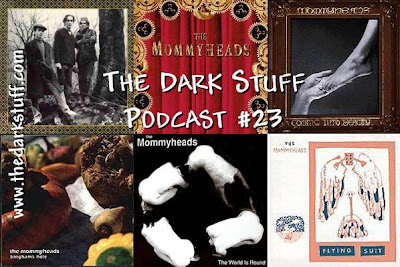 After another hiatus, I have returned with Podcast #23. This episode is part of a new series I am starting on obscure, under-appreciated bands from 1990s that I think you should know more about. For #23, I am focusing on the San Francisco band The Mommyheads.

The band existed from 1987 - 1997, released four full-length albums, one EP, and numerous singles. They began as something of an eclectic, arty, XTC-inspired pop band (think of 'English Settlement' for a reference) and gradually became a streamlined, polished, professional, rootsy rock band with enormous commercial potential (think of The Band). It didn't happen for them, however.

Despite grabbing the attention of veteran record producer Don Was, and securing a contract with Geffen Records, the band was met with indifference by the late 90s music industry and had its career cut short after only one major label album.

I hope you enjoy the show and it prompts to scour the used bin at your local record store looking for Mommyheads CDs.

Listen to the show here.

Email ThisBlogThis!Share to TwitterShare to FacebookShare to Pinterest
Labels: Podcast