No More Debates and No More Tim Russert As "Moderator" 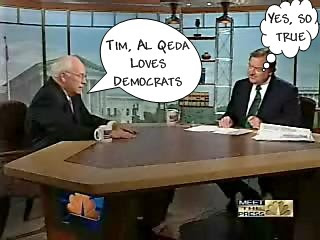 While the Scooter Libby trial was something of a disappointment (because Libby was not jailed for treason), it taught us at least one important thing. Since Bush/Cheney stole the election in 2000, they have used Meet The Press and its host, Tim Russert, as their #1 way to advance their bogus talking points to the American people (even more so than Fox News!).

It was on MTP that Dick Cheney was able to advance the following whoppers without interruption or contradiction from Russert: Saddam Hussein collaborated with Al Queda on 9/11, Iraq has an active nuclear program, Iraq has WMD, the insurgency is in its last throes, etc. etc. etc. All lies. All told on the "respectable" Meet The Press to it's "tough" host Tim Russert.

Russert was one of the moderators at last night's Democratic debate, and I'm sure Dick Cheney was watching and cheering along to Russert's performance. His tone was one of contempt for the candidates (a very Brit Hume-esque performance), and he barely allowed either Clinton or Obama more than a half second to answer any of his many "gotcha" questions before he interrupted them and accused them of refusing to answer. The questions seemed straight from the Republican National Committee: Why won't Hillary Clinton release her tax returns, why does Louis Farrakhan support Obama (asked three or four times), if Al Queda took over all of Iraq would you still want to pull our troops out, is leaving Iraq a victory for Al Queda, why does Obama want to cozy up to Mahmoud Ahmadinejad, why does Obama want to "bomb" our good, reliable ally, Pakistan, and a number of bogus questions on NAFTA. It was shocking how different in tone Russert is when grilling Democrats versus coddling Republicans. He really needs to get over his man-crushes for Cheney and John McCain. I can just imagine the general election debate. For Russert, it will be "St. John McCain the straight-talkin, tough guy" versus "Barack Obama the terrorist coddling, cut and runner, who makes good speeches." Just wait...

Talking Points Memo has pieced together a montage of Russert's greatest hits from last night:

And let me just say how glad I am that this was the last Democratic debate. For more evidence of Russert's shilling for the GOP, read this article.
Posted by Dave Splash