I had a pretty packed weekend which is sort of unusual for me these days. I had two main things on the agenda: the Democratic caucus and the Daniel Johnston concert. I decided to stay in on Friday night so I could get up early for the caucus on Saturday. I took the opportunity to watch the documentary, The Devil and Daniel Johnston, in anticipation of Saturday's show.

The movie was pretty good, and it gave me a little more insight into the guy and his bizarre life and career. It didn't make me a fan by any means, but I learned a lot about the guy. Most of my previous experience with Daniel Johnston had come through other artists recording his songs (i.e. fIREHOSE, Built To Spill, Yo La Tengo), and not the original tunes themselves. After watching the film, I wasn't sure what to expect from the concert, but I had already committed to go, so....

As planned, I woke up early on Saturday morning so I could get my caucus on! The dipshits in the Douglas County Democratic Party told me the wrong caucus location to go to, but luckily, I got a call from the Obama campaign Friday night, and they told me the correct location. Then, to be sure, I dug around and found my voter registration card which I used to determine the correct spot. Turns out, the local crew was wrong and Obama's people were right. No wonder Democrats don't win elections in this state!

The caucus itself was a total clusterfuck. At my caucus location, the crowd was overwhelming. There were easily over 1000 people, and they tried to wedge all of them into a tiny, middle school gymnasium. This, of course, came after the "organizers" made everyone wade through a labyrinth of different lines that wove in and out of various rooms in the school. After about 40 minutes of waiting in line, I finally got my blue card (needed to caucus) and went to the gym to stand on the side of my candidate.

During the wait, I stood on line next to Mike Mogis of Bright Eyes. He was a nice guy, and he told me that he would soon be working on an album from Conor Oberst, M. Ward, and Jim James (My Morning Jacket) together. This would explain why all three were in town the other night for the Obama rally at Slowdown. I lost him when we had to go to separate lines to check in. In the chaos of the gym, I was unable to find him again.

No matter really, as I saw a few people I had not seen since high school among the caucus goers. It was weird catching up in that way, but nice nonetheless.

The "organizers" of the caucus (i.e. party officials) had absolutely no idea what the hell they were doing. Even with some political big wigs in the building (Sen. Ben Nelson, former Sen. Bob Kerry), the event was full-on amateur hour. The caucus was supposed to start at 10 am, but did not actually start until nearly 11. At my location, the participants were overwhelmingly for Obama - I'd say about 70-30%, with a small group of undecideds.

According to the rules, each side picked a representative to speak in front of the whole group, and then those persons took a few minutes to lobby the undecideds. After another 10 minutes of standing around, the undecideds were told to pick a side or leave. Most picked Obama. The next step was doing an actual count to see who won the caucus. One of the organizers suggested everyone "count off." This was met with a number of loud boos, and near total confusion from the crowd. Ummmm....how about we all turn in our cards and you just count those? Duh. That is what ended up happening. I turned in my card and got the hell out of dodge.

Bottom line for me is that a caucus might work in a small town, but in today's day and age, in a city the size of Omaha, it is ridiculous. Give me a ballot and a booth. I don't need the community aspect of voting. I'll socialize on my own time, thank you. 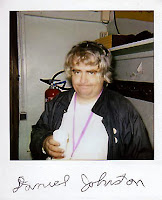 After the caucus was finally over, I went home and crashed for a few hours. Then, it was on to Daniel Johnston. As I stated earlier, I could hardly be considered a fan of Mr. Johnston, but I wanted to give him a fair shake.

Unfortunately, I missed the set from opener Jake Bellows (of Neva Dinova), so I have nothing to report on that. I caught most of the other opener, Flowers Forever. They were better than I remembered from a previous show, but not by a great amount.

By the time Johnston came on stage I was ready to either rock the fuck out or get the fuck out. One or the other. The show experienced some technical difficulties right at the beginning, so it had kind of a rough start. Daniel began the show unaccompanied with just his guitar. His voice was a bit off, and he doesn't really keep good time, so I was very happy when he brought out another guitar player.

The songs were much improved with someone else playing along to Johnston's vocals, but I still wasn't totally feeling it. I was definitely in the minority, as the packed house seemed to be loving all of his out-of-tune yodeling. Johnston took a break after about 1/2 an hour, but returned shortly with a full band.

The band was comprised of local musicians who selected which songs to play from Daniel's website. Though the band was decent, it just didn't make the show any more enjoyable for me. I left shortly into this part of the show. Sorry, friends, I just don't "get it" with Daniel Johnston. I don't see what the big deal is. I went home and had a late dinner. I liked that much better than the show.

I spent the early part of Sunday preparing for my radio show later that night (another two hours of broadcast excellence, btw). I am starting to get a little fed up with the radio show, to be honest. I got ragged on again this morning about "calls to action" which I am fairly certain I am not doing. I was told that I could mention a concert, the date, the venue, and where to get information (i.e. website) but I could not tell people to go to it (or that I was going to it). I don't do that.

Yet this morning I received another bitchy email complaining about a violation of the policy without citing anything specific. How am I supposed to know what NOT to do, if you can't point to a specific error?! What made this email all the more annoying was that the person who sent it was at the station when I was on-air. Don't you think that if I violated an FCC rule that could potentially cause the station to be fined, then that person would walk the 20 ft over to the broadcast booth and say something? Is that too much to ask? But passive-aggressiveness rules the day, so a bitchy email the next day is the way it gets handled. Nice.

I feel like I am owed a little more of a personal explanation (with specific infractions if there are any) of the rules. I have volunteered my time to this station for over three years. I did not miss a single show in the entire year of 2007. I take the show very seriously, and consider it to be important, despite the fact that the station does not share that feeling. These people have my number, so how about a call once in a while? I only hear from them when they are pissed, and only in email. I don't think I have ever heard anything positive from the station management in over three years!