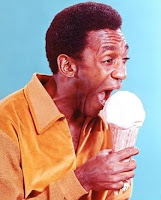 My birthday is coming up in a couple of weeks, and if you were wondering what to get me, here is a suggestion: Bill Cosby is making a rap CD!

(AllHipHop.com) Bill Cosby - a staunch critic of some rap music - is set to release a Hip-Hop album called State of Emergency, which will be a sanitized, issue-oriented CD.

In 2004, Cosby said in a speech, "Your dirty laundry gets out of school at 2:30 every day, it's cursing and calling each other [the N-word] as they're walking up and down the street. They think they're hip. They can't read. They can't write. They're laughing and giggling, and they're going nowhere."

Cosby's album will not contain any profane language, nor will it offer any denigrating comments towards women.

State of Emergency would be the 35th album for the legendary comedian, actor, who released his first album Bill Cosby is a Very Funny Fellow in 1963.

Whether or not Cosby will work with rappers on his lyrical flow or his musical selection was not known at press time.
Posted by Dave Splash