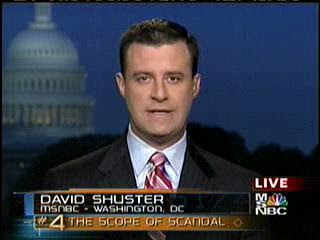 MSNBC has suspended reporter David Shuster after his on-air comment regarding "pimping" Chelsea Clinton last night. Video of the initial comment, and Shuster's super-weak apology can be found here. The MSNBC statement is up at Media Matters.

I like David Shuster a lot. He is a great investigative reporter who has done a lot of good work exposing the many scandals of the Bush Administration. But I am glad that finally someone is taking the extreme anti-Clinton bias in the media seriously. It seems that nothing is out-of-bounds when discussing the Clintons. Hell, I'm supporting Obama and it still pisses me off on a regular basis. Would it be okay for members of the media to say that John McCain was "pimping out" his daughter if she made a campaign appearance for him? What about with Obama? Did he "pimp out" his wife for the speech in Lincoln, Nebraska earlier today? Of course, not. There would be near universal outrage if it were said. But when discussing the Clintons, of course, no characterization is too crass...ever.

To me, Shuster's comment is one of the more offensive anti-Clinton remarks mainly because it is about the Clinton's daughter which I thought was out of bounds. However, it is hardly the worst that has been said during this election cycle, not even the worst said on Tucker (where the original comment aired).

UPDATE: Shuster apologized again at the beginning of today's Tucker. He seemed more sincere this time.

UPDATE 2 (7:20 PM): Keith Olbermann apologized about this incident in his usual eloquent way on his show.
Posted by Dave Splash

I agree with you wholeheartedly. If only they had suspended Tucker!

I like Shuster a lot, too. He's always willing to stand up to Joe Scarborough.

I am not familiar with Shuster and his reporting.

I do know that I used to get totally pissed off at negative comments about Chelsea when she was just a kid. Looks like some stuff hasn't changed a whole lot. It even ticked me off when people were making fun of Huckabee's kids, and I HATE HUCKABEE.

We should all be used to it by now or at least expect such tactics. I didn't hear about the Huckabee kids and agree that even that would be wrong. BUT... let's face it... as the race heats up and whichever Democrat ends up leading the pack (I still see a Clinton/Obama or Obama/Clinton ticket looming) will face a scathing and endless attack from the Republican political torture machine. And once they win and are in office the attacks will not let up. Look back at all the Democratic Presidents in our lifetimes... all attacked and mocked endlessly. If a Democrat President had done 1/10th as much as the Bush/Cheney regime has done they would have been impeached and jailed in their first term instead of protected and bowed down to. Sickening.