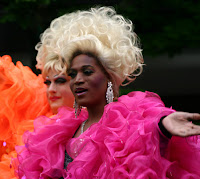 This is too funny. A Bush appointed, federal judge is resigning from his position after getting busted for drunk driving. Judge Robert Somma, appointed to the bench in 2004 by George W. Bush, will resign on April 1 after serving only three years of a 14 year appointment. When arrested, "Somma was wearing a cocktail dress, fishnet stockings, women’s heels and fumbled through a purse for his driver’s license." (Boston Herald)

The judge failed a field sobriety test, blew a .12 blood alcohol level, and had a hard time keeping his balance (maybe be was wearing high heels).
Posted by Dave Splash