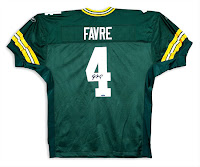 I am a Green Bay Packers fan. They became my team after I lived in Wisconsin. I have a theory that the Pack will make it to the Superbowl this year, beat New England and ruin their perfect season, and then Brett Favre can retire on top. Dare to dream, right? Well, guess I'm not as much of a fan as this guy...

PORTAGE, Wis. (AP) — Upset that his 7-year-old son wouldn't wear a Green Bay Packers jersey during the team's playoff victory Saturday, a man restrained the boy for an hour with tape and taped the jersey onto him.

Mathew Kowald was cited for disorderly conduct in connection with the incident with his son at their home in Pardeeville, Lt. Wayne Smith of the Columbia County Sheriff's Department said. Pardeeville is about 30 miles north of Madison.

The 36-year-old Kowald was arrested Monday after his wife told authorities about the incident. Kowald was taken to the county jail and held until Wednesday, when he pleaded no contest, paid a fine of $186 and was released.

Kowald's wife filed a restraining order Wednesday, so Kowald will not be able to have contact with his family, Smith said. Smith said other domestic issues have surfaced, though he wouldn't elaborate.

The boy refused to wear the jersey Saturday, when the Packers beat the Seattle Seahawks in a playoff game, Smith said. Smith said the incident sounded strange when reported at first, but the mother took pictures with her cell phone and that type of evidence is difficult to dispute.

Kowald, contacted later Wednesday by the Portage Daily Register, said the incident started as a joke. His son challenged him by saying he wouldn't root for the Packers. When he tied the boy up, the youngster was laughing while his wife took pictures, he said.

"Then he couldn't get out and he got upset and that's it. It lasted a minute," he said. "I didn't mean no harm, and he knows that, but I haven't been able to tell him that."

"I wouldn't agree with what he did, but legally a parent can restrain a child," she said. "I have no proof of emotional damage. ... I have to follow the law.

Email ThisBlogThis!Share to TwitterShare to FacebookShare to Pinterest
Labels: Football

Go Pack! With Favre at the helm, you really have to say they should be called America's Team.