So Much For the Conventional Wisdom 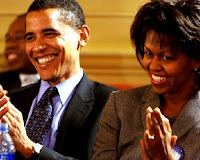 Okay, so the Iowa caucuses have defied the conventional wisdom, and the two "establishment" candidates (Clinton, Romney) lost. Sadly, my preferred candidate, Joe Biden, only got 1% of the vote and has dropped out of the race. But, on a positive note, the "youth vote" actually showed up for once and made the difference in the Obama victory. I am shocked. This never happens. Maybe, we are on the verge of major political change in America. I certainly hope so.

Despite what I said about Obama after seeing him the other day, I was thoroughly impressed with his victory speech last night. I finally saw what so many others have been seeing - the inspirational quality of his speeches. I especially liked the part about getting away from the divisive politics that looks to get 51% of the vote, and avoid real consensus. I tend to agree with pundits like Chris Matthews who say that the Obama victory is a total repudiation of Bush and of the old-school, divisive, us against them, way of doing things. If Obama wins the nomination, and wins the presidency, it would also show that America is ready to rejoin the world community -- and not dictate to it from on high.

Despite the uplifting words coming from Obama, I am very worried that he is underestimating exactly how nasty the attacks on him from the Republican party will be. The racist, "Southern Strategy," that the GOP has successfully used since the 1960s will be in full force. The right only knows how to run on fear -- it is their only play. And they will try to scare the electorate about Obama using the most crass methods. They have already started with the "Obama-Osama" thing or the "Obama is secretly a Muslim" story that the right has been peddling. That false attack will be less offensive than the blatantly racist attacks that right-wing special interest groups will lodge on behalf of the Republican candidate. It will get ugly. I hope Obama is prepared, and I hope the country does not fall prey to this negative and cynical manipulation of the people. We have the potential to show what is great about this country, and I worry that, instead, we will degenerate into showing the world the worst about this country.

I am still undecided about which Democrat to support throughout the rest of the primary season, but after the record Democratic turnout last night in Iowa, I think this will be our year regardless. I really hope so. The idea of a President Huckabee scares the shit out of me. But, the Republican turnout could be very low this year. The Dems 3rd place finisher last night, Hillary Clinton, still received more votes than the Repubs #1, Mike Huckabee -- and Iowa is a swing state (went for Gore in '00 and Bush '04). The Republicans could wind up only getting the South, and becoming just a regional party.

I'm getting ahead of myself. All in all, I am happy about how things turned out and am feeling optimistic for the first time in seven years. And doesn't Michelle Obama remind you of a black Jackie-O? She would be the most glamorous First Lady in decades. I know that's not super important, but it's nice nonetheless...
Posted by Dave Splash

I thought Obama's speech last night was really powerful. He can be really inspiring.