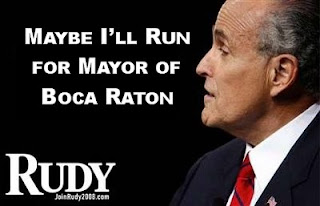 So long, Rudy. The "fascist thug with a comb-over"* is set to drop out of the GOP presidential race today. His Florida-or-bust strategy failed as everyone had predicted. But don't believe the spin that Rudy didn't campaign anywhere except for Florida. He spent millions in New Hampshire and Iowa, and he DID campaign in both of those early states. The simple fact is that the more people get to know Rudy Giuliani, the less people like him. He is a thoroughly unpleasant person.

I admit to feeling a certain sense of relief that I will never have to hear the phrase "President Giuliani." That prospect scared the shit out of me. Now that Rudy is over, I have to laugh at Fox News and Sean Hannity. They were so in the tank for Rudy, and with all of their ratings and influence, were barely able to get Rudy more votes than Ron Paul.