Actor Alec Baldwin clipped this right-wing racist column about Barack Obama from Long Island, NY's The Independent newspaper and posted it at Huffington Post. The column is a conservative attempt at humor, but is one of the most blatantly racist things I have ever read in a mainstream newspaper. The paper has removed the column from its website and is trying to pretend it was never published. But Baldwin wanted to make sure garbage like this does not just get swept under the rug.

Is this the way the right-wing will attack Barack Obama in a general election? I say, yes. Rush Limbaugh was given a conservative award for writing a song called "Barack the Magic Negro," and not a single Republican condemned it. Add that to the nasty emails circulating that accuse Obama of either refusing to sing the national anthem or refusing to look at the flag, that he is/was a radical Muslim poised for jihad on Inauguration Day, or that he is somehow affiliated with Louis Farrakhan. Get ready for this shit if Obama is the nominee, my friends. We need to start preparing our push-back if this is going to be the road the GOP takes. 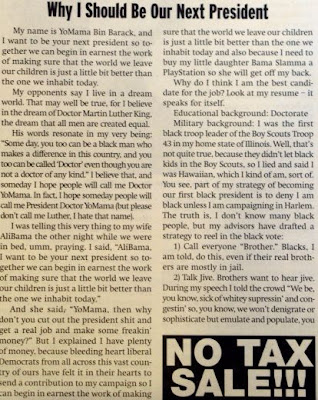 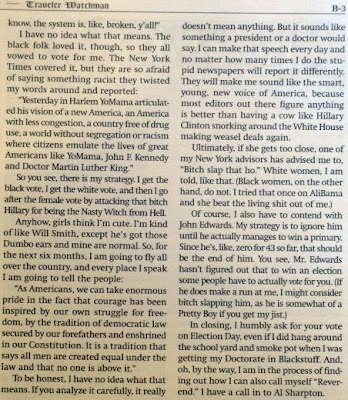 I truly believe this kind of stuff will backfire on the GOP this year. People have gotten wise to their tricks.