Now We Have a Real Race! 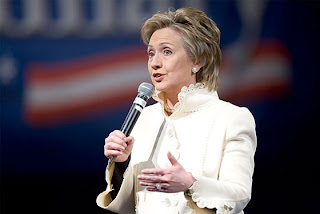 Last night's New Hampshire primary perfectly exemplifies why I love politics. What an amazing night! I say that not because I am a Hillary Clinton or John McCain supporter, but simply because this race is so exciting and unpredictable, and all of the pundits and pollsters look very foolish this morning.

Why did Hillary make a comeback? Who knows for sure, but it certainly didn't hurt her cause when she was heckled at numerous appearances by neanderthal Republican men chanting "Iron my shirt!" That probably put more than a few women (and fair-minded men) into the Hillary column. She also had a strong debate performance on Saturday night, and did not appear shaken by her loss just two days earlier.

I disagree with pundits like Chris Matthews who chalked up the Hillary victory to racism. Matthews said over and over this morning on Morning Joe that obviously white people were "lying" to pollsters when they said they would vote for an African-American for president. Lying? I don't think so. First off, Clinton won by 3% which is hardly a landslide. Did Chris wonder if people were "lying" to pollsters for months when they said they would vote for a woman for president, and then didn't in Iowa? Perhaps, the dynamic changed in the last 48 hours because of the massive pile-on from the media all claiming that Clinton's campaign is over. How many esteemed columnists wrote about the "end of the Clinton era?" Why is it that no one gives Hillary Clinton any credit for re-tooling her message and approach, and for that change to have had such a rapid effect?

Did you notice the contrast in the coverage of the other New Hampshire "come back?" While the media giddily wrote Hillary's obituary last week, when John McCain bottomed out last Summer, the reporting had an almost "aw, what a shame" tone to it. His victory last night was essentially greeted with tears of joy by the media. The "Mac is back" they all proclaimed. But is he really back?

McCain? Well, he's gotta win something, right? His victory over Romney put the GOP field into chaos, and the party now has 3 or 4 front-runners. New Hampshire should have put the final nail into the coffin of the Fred Thompson campaign. Not that you'll notice a difference since he's been half asleep throughout his time in the race. He was beaten by Ron Paul in both Iowa and New Hampshire, and Fox News even banned Paul from its debate! So long, Freddie. So long Mary Matalin.

I would not count Mitt Romney out, because he has finished second place in both contests (and won a little-mentioned caucus in Wyoming). If you averaged out the various placements, Romney would have a higher average than any other Republican, and thus far, he has received the most convention delegates. Giuliani hasn't gotten closer than 4th, and he is still considered "in the race." Plus, if you remove independents, Romney is stronger among registered Republicans and should win some of the closed primaries. Add those factors to Romney's bazillion dollars in the bank, and you have to conclude that he will be around for a while.

For the Democrats, I think something should be noted. Hillary Clinton is sometimes more successful when people perceive her as being a victim. This is hardly the only reason, but it is a relevant factor. The knock on Hillary has been that she is "polarizing" and has high negatives. I think this polling should be questioned in light of last night. But while many Dems questioned Hillary's electability, they may be overlooking just how rabid and unhinged Republicans get when discussing Hillary Clinton. As soon as the "iron my shirt" crowd starts coming out more, and the Republicans delve into their 1994 play book of smear and rumor mongering, the electorate will likely rally to Clinton as they see just how out-of-touch and stuck in the past the GOP is. The conventional wisdom says that this "partisan bickering" will turn off the electorate, but how right has the conventional wisdom been so far in this election? Perhaps the electorate will reject the Newt-Rove-Bush-Delay style of politics and see that voting for change, is a vote for a Democrat - any Democrat.

The bottom line for me is that I still don't know who I will be supporting. Maybe if Clinton and Obama remain close, and alternate wins, the nomination won't already be wrapped up by the time of the Nebraska primary in May and I'll have to make a choice. This is doubtful. But Nebraska is trying to have its first ever caucus in February. I think this might end up being just for PR, because the May primary is still happening. Since I've never caucused before, I would like to try it.

The more I see, the more I am optimistic about our chances in 2008. This could be the kind of sea change election like 1980 was, but in the other direction.
Posted by Dave Splash

You say: "This could be the kind of sea change election like 1980 was, but in the other direction."

When Reagan swept the office in 1980, this truly was a sea change. The administration came in with a sweeping Chicago School Friedmanite neoconservative economic and political agenda, one that has set the pace for each future administration since, both Democrat and Republican.

What sea change will we see with Obama or Clinton, a kinder gentler Chicago School agenda? Especially with their obsequious hands across the aisle rhetoric, and, even more frighteningly, actions. (that's all nice and good feeley, but lest we forget, there are real issues at stake here, huge differences in agendas, expected outcomes, etc.)

I am expecting not a sea change, but a pond stir.

I will concede your point that neither Clinton nor Obama have such a pent up, three decades in the making, type of agenda they plan to unleash upon America. Maybe sea change was too strong a word.

But if Hillary Clinton or Obama achieve universal health care in their time in office, then I'd argue that is enough to qualify it as significantly more than a "kinder gentler Chicago School agenda."

That would be a monumental achievement, and in that, Clinton has the edge.

But as for Obama's "obsequious hands across the aisle rhetoric," I can't think of any of the major government achievements of the last century (social security, civil rights/voting acts, medicare, to name a few) that did not utilize some degree of bi-partisan support.

I'd like to crush the Republicans into tiny pieces, and eradicate their talking points from the political lexicon, but the fact is, we are still a divided country. 2008 should, by all accounts, be a good year electorally for Dems and progressives of all flavors, but that should hardly be viewed as the end of conservatism. Like it or not, the US is a right of center country and always has been. We had a brief flirtation with the far left in the 1930s, but really that is about it. Reagan moved us even farther right, and made the center appear as the left to many. If we can just get back to that center, I'd consider it a good start.

Maybe it will be just a pond stir, as you say, but I still welcome it with open arms.