Not Even Rosario Dawson Could Save 'Clerks 2' 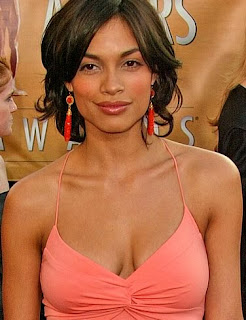 Please! I implore you - DO NOT watch the movie Clerks 2. It may be the single worst movie I have ever seen. I hated every single second of it. Like the title of this post states, not even the hotness known as Rosario Dawson could save this piece of shit.

I have already stated a number of times that I am not a fan of Kevin Smith movies, but the first Clerks was a decent flick. But the sequel -- where the convenient store the guys worked at is burned down and they must move on to a new McJob -- has no redeeming qualities whatsoever.

Every joke fell flat. Every gag was ridiculously poor. The idea that a woman like Rosario Dawson would go for a 35 year-old burger flipper is so idiotic on its face, that I'm not sure why anyone would write that into a script of any sort. This movie actually pissed me off. It took 100 minutes of my life. Kevin Smith - I want my 100 minutes back you jag off!

Please do not make the same mistake I did. Watch anything else but this...
Posted by Dave Splash

I watched less than 4 minutes of it and then threw it into the garbage bin. The movie is stupid, boring and retarded. Like all of mr. Smith's movies, except Clerks, I agree with you on that.

The guy is still trying to cash in on a movie that was popular more than a decade ago. I just don't understand what kind of an audience except kids or retarded infantile adults would laugh at his "jokes".

And Rosario Dawson isn't that much of a woman. There are wagons of much more beautiful women in cinema than her.

We agree on Smith, but we'll have to agree to disagree on Rosario Dawson.

Agreement on disagreement signed in blood.