My Take On The Obama Rally 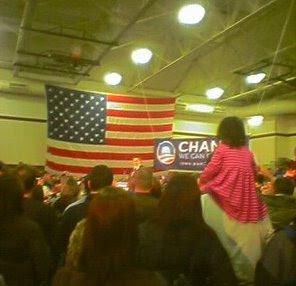 I made it out to the Barack Obama rally last night at the Iowa School for the Deaf in Council Bluffs (note the crappy cell phone pic). Though I thought the event was very interesting, and I'm glad I went, I did not leave the auditorium "inspired" by Obama the way so many others claim to have been.

He is a great speaker, and it seems he would be a good president (especially when compared to the current one). Throughout his 45 minute appearance, I didn't hear much of a truly compelling reason to vote for Obama, other than he is not a Republican. For me, that is enough in 2008; but I still like being for someone rather than just being against someone else.

Obama did not mention any of the other Democrats by name, and the biggest applause line came when he pointed out that George Bush is not on the ballot this year. The crowd was not as large as I thought it would be, and there were a number of Obama volunteers trying to get people to move to the other side of the stage to make the room look more full for the TV cameras. There were a lot of people in the room from across the border in Nebraska at the rally, which may have disappointed the organizers because they could not participate in the caucus. Oh well...

Besides seeing Obama, I was most fascinated looking at the media section in the back of the auditorium. I wanted to see if any of the "big names" in political coverage were present (i.e. Chris Matthews, Wolf Blitzer, etc). I spotted a few folks that I have seen on the various political shows amongst the media. I saw Richard Wolffe of Newsweek and Ryan Lizza from The New Yorker. It will be interesting to see how these guys saw the event last night, and I hope they will be on TV talking about it. Neither one seemed to be paying that much attention to the actual speech, however.
Posted by Dave Splash