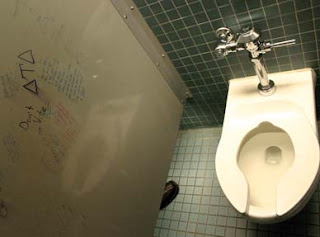 This is rich. Idaho Republican Senator Larry "Wide Stance" Craig is still fighting his bathroom sex solicitation charge (despite pleading guilty). Now his lawyers are arguing (among other things) that "...the hand signal allegedly used to communicate a desire to engage in sexual conduct would be constitutionally protected speech." Huh? Larry Craig has a constitutional right to harass people in neighboring bathroom stalls in a public restroom and try to engage in sex with them? Is that really the argument?

Republicans like Larry Craig fight for their rights for gay sex in airport mens rooms, but don't raise a finger to protect the 4th Amendment when the Bush Administration engages in blatantly illegal wiretapping of American citizens. Nice priorities, gentlemen.
Posted by Dave Splash

Would it be "free speech' if Larry had simply said something like, "Anyone here interested in casual homosexual activity?" in a normal voice, without any fumbling intrusions on other cats' stalls?

Not sure on that one, but I suspect Senator Craig has his legal dream team working on getting an answer to that question.