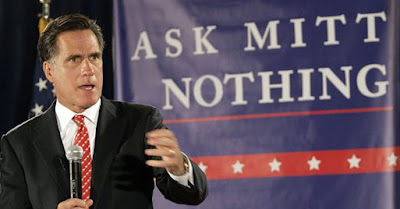 While fending off charges that he sat back and tolerated his "faith's" (and the "faith of his father," as Mitt likes to put it) discrimination against black people (until they rescinded the policy under threat of losing their federal tax exempt status), Mitt Romney has told the country another whopper. Romney has been peddling a story that his father, while Governor of Michigan in the 1960s, marched alongside civil rights legend Martin Luther King, Jr. in Grosse Point, Michigan. This was meant to show, I guess, that though it was official church doctrine to view blacks as lesser beings, the Romneys would have none of it. "I saw my father march with Martin Luther King," Romney claimed.

The problem? It didn't happen.

The Romney campaign is now "clarifying" their lie: "On Wednesday, Romney's campaign said his recollections of watching his father, an ardent civil rights supporter, march with King were meant to be figurative."
Posted by Dave Splash

Yeah, Mitt is SO proud of his Mormon religion. But please don't ask any questions about what they believe.