This is just for Omaha people. Two people have been killed and possibly five injured by a gunman at the Von Maur store at the Westroads Mall in Omaha (less than a mile from my house, yikes!). WOWT has more information.

MSNBC is covering it also. This is pretty frightening. A live grenade was found in the parking lot of the same mall just four days ago.

UPDATE (12/6/07): At the end of this incident, nine people (including the gunman) were killed and another five were injured. Suffice to say, Omaha as a city, is beyond freaked out.

UPDATE (12/14/07): Here is a picture of the Von Maur store with flowers and cards for the victims of the tragedy. 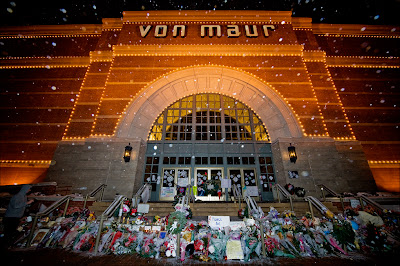 Sorry to hear about what happened today in Omaha.

First thing I did after reading about it in the news was to check to see if you wrote anything to make sure you didn't go shopping for the latest Brittany Spears CD at Westroads at the wrong time or something.

Anyway, it makes me feel safe here in my office in Jerusalem...

Luckily we don't have to feel on edge with the possibility of crazy people shooting randomly or blowing themselves up for stupid reasons here... or .... well... nevermind...

Someone who works for my brother was at that store about an hour or so before the incident. Luckily, she was ok. For me, I got the new Britney CD online, so I didn't have to go to the mall.