The Only Holiday Song You Need In Your Collection 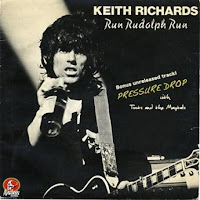 The tune, popularized by Chuck Berry, will be sold on a two-for-one basis with Richards' more-recent rendition of Toots and the Maytals' "Pressure Drop."

The arrangement does not include the B-side of "Run Rudolph Run," Richards' cover of Jimmy Cliff's "The Harder They Come."

Richards recorded "Run Rudolph Run" in 1976. The "Pressure Drop" redo dates from a session in 2003, when he contributed the track "Careless Ethiopians" to the Grammy-winning Toots and the Maytals album "True Love."

The tunes will go on sale on December 11, a week before Richards turns 64.