Obama Has Oprah, Hillary Has Tera 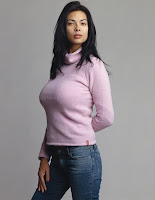 Any idea who Ron Jeremy is supporting?
Posted by Dave Splash