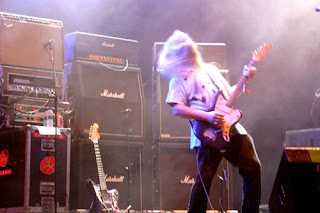 As I'm sitting in my office writing this post on last night's Dinosaur Jr. show, all I can think of is how much damage I did to my hearing last night. I am still getting ringing in my ears and the concert ended over 10 hours ago. That shit was loud. It was even louder on the floor, but I stood up in the balcony in my usual Slowdown spot. I was on J. Mascis's side of the stage, and was able to watch the man at work on that guitar.

My friend and I were talking on the car ride home (probably yelling since neither of us could hear), and we both thought that J. might have been the single greatest guitar player either of us had seen in person. He was absolutely unreal. His on-stage demeanor made it seem so effortless, too. The way he ripped through some of the most intricate guitar solos, only pausing to sing a few words every now and then, was unbelievable. I was in awe of his raw talent. Lou Barlow and Murph are no slouches either, but from my vantage point, all I could focus on was Mascis.

The Dinosaur show was a little more than an hour, which is on the short side. And though I was blown away by the intensity of the band's performance, I was confused by some of the song choices. Unlike the 2006 reunion tour of Dino Jr, this tour's set list was not limited to the band's first three albums. In fact, they played only two songs from their debut, one from Bug, and maybe 3 songs from You're Living All Over Me. Surprisingly, latter day Dinosaur stuff like "Out There" and "Feel the Pain" were played, along with a bunch of songs from their new album, Beyond. I was expecting tunes from Beyond, but was not expecting songs from the "post-Lou" period of the band.

From my spot in the balcony, I could see the set list, and saw that "The Wagon" was scheduled for the encore. In actuality, they substituted "In a Jar" which I was happy about (though I love "Wagon" I wanted to hear more You're Living... stuff). Despite some minor complaints about the set list, I loved the show. Easily one of the best of the year (if not the best). I was totally satisfied. Deaf...but satisfied.

Local opener Coyote Bones were pretty good. It was the first time I had ever seen them, and would definitely give them another shot (Omahype has some mp3s posted). I was very impressed with the touring opener, Awesome Color. They had a real Stooges/MC5 vibe, and they looked like they were about 17 years old. I picked up their CD after the show and found that they are signed to Thurston Moore's Ecstatic Peace label. Thurston even co-produced their album.

Last night was the first show I had been to in a while, and may be the last show I attend for a little bit, too. I tend to be somewhat hermit-like during the winter. If you missed this concert, I feel badly for you. You blew it.
Posted by Dave Splash