I got a lot of relaxin' done over my extended holiday (take that, O'Reilly!) break, but I still managed to get a few things accomplished. I got my newest podcast done, which was my biggest accomplishment, and I did my radio show on Sunday night. Funny thing about doing the show when there is no work or school the next day -- every douchebag in the Omaha metro area calls in to request horrible music. I felt like asking these people if they were actually listening to what was playing before calling in to request Mudvayne or Slipnot or some other crappy band that I would never play on the show. Instead, I just stopped answering the phone. Apologies to anyone who actually wanted to comment on the show.

Saw plenty of movies over the break, as well. I finally watched the director's cut of Donnie Darko -- it made a little more sense with the added material, but was still confusing. Hollywoodland was quite good and Diane Lane looked great in it. I re-watched The Matrix Reloaded again because I have always felt that the two follow-up Matrix movies sucked compared to the original. I still feel that way. Then, of course, I caught a number of newer holiday movies that were on cable like Unaccompanied Minors (kinda cheesy, but Lewis Black made it tolerable). 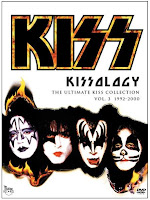 Finally, I spent a good deal of time pouring through all of the footage in KISSology Volume 3. This was my least favorite of the three sets because there was very little material other than concert footage. The concerts were great (one from 92, one from 96, 98, and 2000, plus the entire MTV Unplugged show), but what made the other volumes so good was the amount of previously unseen backstage and/or interview footage or older TV appearances. I'm glad I was able to see the show from the opening night of the reunion tour from Tiger Stadium in Detroit because I was at the show. That was great, but the footage was obviously from the feed displayed on the big screen behind the band, because the screen goes black in between every song. Sort of annoying.

The fourth disc of the set is the coolest because it is the first ever filmed KISS show from 1973. The band was playing in a tiny bar in New York, to a pretty small crowd. It is only a single camera shoot from the back of the room, but the rarity of the performance more than makes up for the poor quality. It was strange that just a few months before their debut album was to be released (Feb. 1974), KISS was still a very unknown band. In addition, seeing KISS do their show with the make-up and the fire-breathing in front of such a tiny crowd, made me realize how bold and different these guys were from anyone else before or since. It took balls to get up there looking like they did back in 1973. They were often mocked or criticized heavily, but they stuck to their guns, did it their way, and it worked. Cool stuff.

I wish I had more to report, but I don't. I should have the next podcast up this weekend (featuring my Top 10 albums from 2007), and for those in the Omaha area, I will have something special for my radio show this Sunday. Stay tuned.
Posted by Dave Splash