Kanye West Is A Douchebag 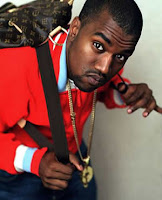 I have never liked Kanye West. I think his music sucks. "Gold Digger" is a decent tune, but the rest of it...bleh. He's a crappy live performer (as witnessed when I saw him open for U2), and he is an arrogant S.O.B.

He's also a major douchebag, as evidenced with his most recent interview in Spin Magazine. Here is my favorite quote:

SPIN: And what foods would fall into that category?

KANYE: White-people food? You know what it is. You never ate fried chicken and said, "This tastes white." It's America. People know the stereotypes. I play to the stereotypes. I believe in the stereotypes. And I submit to them. [Affects a black, Southern accent] "Man, black people sure can cook some chicken! And I'ma get some black chicken."

Yeah, Kanye isn't racist. And neither was Axl Rose.
Posted by Dave Splash

Yeah, he is a douchebag. He might be flying around in a private jet but those stereotypes he's so fond of destroy lives each and every day.

He's black so he can say anything about white people.

Kanye West is a douchebag, in fact he is the biggest dumbest asshole douchy douchebag in the world, he should get tied to a seat and beaten until judgement day punished for his stupidity for all eternitiy! Amen!

Kanye you are making black people look bad again! This guy is such a douchebag, it is beyond funny at this point...I mean he has got to be acting right?? Douche bags don't come this smelly

Hey, everybody, I hate Kanye, too. But if you're going to comment on this site and you use the N word, the comment will NOT be posted.