Is Jessica Simpson a Jinx Or Are the Dallas Cowboys Just Overrated? 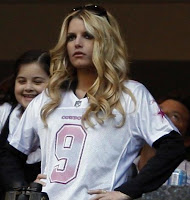 The Dallas Cowboys lost yesterday to the Philadelphia Eagles. The Cowboys were heavily favored, as they were having a good season, while the Eagles were struggling to get a playoff birth. Cowboys quarterback, Tony Romo, had the worst game of his professional career, and Cowboys fans and sports commentators are questioning why.

Rather than just admitting the obvious - Romo is overrated - some have taken to blaming Jessica Simpson. Simpson and Romo are dating, and many in Dallas think she is a jinx. She was at the game with her family and watched her new beau totally blow it on national television.

The sportscasters took a couple of opportunities to blame Jess for Romo's bad performance:

Still, Jessica Simpson is a nice consolation prize after having a tough day. But she won't stay with him if he keeps losing. After all, she has an image to protect.
Posted by Dave Splash

That is great...Dallas is the only threat to the Packers in the battle to be the team that gets to lose the Superbowl.

If Favre hadn't gotten hurt, the Packers would have beaten the Cowboys. I think the Packers could beat New England. It would be tough, sure, but it could be done. Maybe Jessica could break up with Romo and start in with Tom Brady just before the Super Bowl.