I read a ton of news and/or political blogs, and they are all focused on the assassination of Benazir Bhutto. When I got up this morning and saw that news, I was kind of freaked. I have been saying for a long time that I think Pakistan is the most dangerous place on earth. I mean, aside from George W. Bush, is there anyone else that does not think ol' Pervy is aiding Al Queda with all of that money we give him? Ten billion since 9/11 and what have we gotten in return? A safe-haven for Osama, martial law throughout the country, and now the assassination of opposition leaders! I think Bush read Perv about as well as he did Putin. Heckuva job, W. How many more days before we get some real leadership back in Washington?

Naturally, the media is already spinning for the Republicans by claiming that this act of terrorism will help their presidential chances. Could it be a little more obvious who the "liberal media" really support? Will there also be a "Bush bounce" in the polls? Let's wait with baited breath for the pundits to say so.

Let's see, what else? One of my favorite web sites, Hot Chicks With Douchebags, has posted their "best of" for 2007. It is a hilarious must read.

One of the coolest bands of the 90s, Rocket From the Crypt, will be releasing a CD/DVD set of their final show in February. I had kind of lost touch with this band, and I admit, never even heard their final two albums. Saw them once at Lounge Ax in Chicago, and they were fucking amazing. Should be a good disc.

Because of all the Republican shenanigans in Congress (mostly the Senate where the right filibusters as often as it breathes), and the delay in getting the budget passed, at least 3 million people will have their tax refunds delayed according to the IRS. Luckily, this will not effect me. I am either too rich or too poor for the AMT. I'll let you decide which one it is. 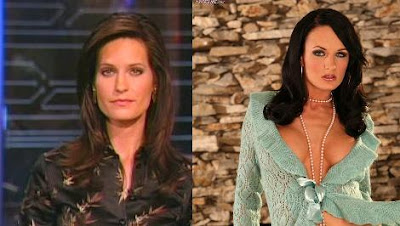 I believe that I may have already posted about this one once before, but how about MSNBC anchor Contessa Brewer and Alektra Blue? Am I right, or what?

I have plenty more that I will be posting over time. If you have any, email me.
Posted by Dave Splash