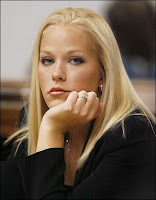 I do not mean to make light of sexual assault or sex predators at all, but you will have a hard time getting me to feel really sorry for any of the victims of Debra LaFave. Call me sexist. I don't care.

Still, she clearly has some type of mental illness, and does exhibit some of the behavior of someone with a sexual compulsion. Especially, since she was just re-arrested today. "Debra Lafave, the former Greco Middle School teacher currently serving house arrest for having sex with a 14-year-old student, was arrested about 12:30 p.m. today for a probation violation, according to records."

What she actually did to violate her probation is not stated in the article, but MSNBC reported on-air that she was found to have "talked to a 17 year old co-worker" which they claim violated her probationary ban on interaction with minors. They also said the co-worker was a female, and that the conversations were about "high school and boyfriend issues." Wikipedia threw in the word "lewd" along with the talking, so I don't know...

There has to be more to it than that. Talking to a 17 year-old?! I guess, technically, that could be a violation, but it seems a bit light. I don't want to go too far out on a limb for LaFave here, so I won't say this is some type of witch hunt (A provision of her plea deal states she could ask the court to commute the final year of house arrest to probation if she completes the first two years without incident, which she has done). But if all this is about is talking than perhaps the police are overreacting. Then again, she did try and argue (through her lawyer) that she was "too pretty" to go to prison, and, essentially, demanded house arrest. Maybe she thinks she is too pretty to follow the terms of her parole, too.
Posted by Dave Splash

I agree. This seems pretty harsh.

While I'm normally rather unrelenting when it comes to child exploitation of any kind, this new case is ridiculous.

Those on parole are normally expected to report employment changes to the parole officer, especially while under house arrest. Since officials in this case were aware of Debra's employment, part of the blame belongs to them. Maybe all of it.

Just about everyone knows that restaurants regularly recruit teenagers to staff their establishments. How does one work side by side with a minor without establishing contact?

Restauraunt employees are expected to communicate and work as a team. Waitresses, hostesses, kitchen employees and management are always communicating with each other in order to expedite hot food and cleanliness expectations of the customer.

This case is a sham, as it would appear at this point that parole officials are either dumber than a rock, unrealistic in their expectations, or simply fell asleep at the wheel.

The Parole Officer could have rejected this employment arrangement altogether, knowing that contact with minors was an unrealistic expectation of this kind of employment. Instead, thousands upon thousands of tax dollars will be spent prosecuting a case where the arrangements were dubious from the start.