Catch the Spirit of Guided By Voices at Waiting Room Tonight 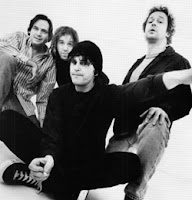 Tonight at Waiting Room is the Guided By Voices tribute band, King Shit and the Golden Boys. I don't know anything about the band, but seeing as how GBV is one of my all-time favorites, I guess it's worth a trip over there.

The band's name comes from the album of GBV outtakes with that title. It's funny, but about 11 or 12 years ago, I was in Austin, Texas for South By Southwest and I saw a band called King Shit and the Golden Boys. When I heard about the show, I assumed it was a "secret" show by the real Guided By Voices, and that only I had figured it out. When I arrived at the club, I spotted Gerard Cosloy (head of Matador Records, GBV's label at the time) outside, and thought it was a sure thing.

Turns out, it wasn't Guided By Voices. It was Spoon. Don't expect Spoon to show up tonight, but I guess it's not impossible...
Posted by Dave Splash