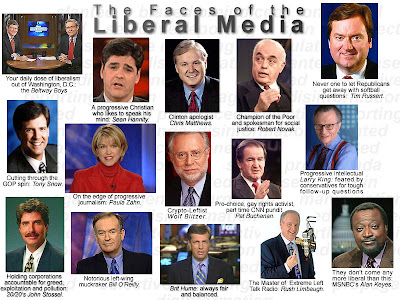 Anytime I hear the idiotic winguts complain about the so-called liberal media, I am always confused. Where is it? At the NY Times? I don't think so. The Times led the charge into all of the bogus Clinton scandals (Whitewater anyone? How many tens of millions were spent to discover nothing illegal was done?) in the 90s, repeated every false claim about Al Gore levelled by the GOP in the 2000 election, and were among the loudest cheerleaders for Bush's Iraq War policy. To my knowledge, the paper has never condemned its former employee Judith Miller for becoming a stenographer for Bush/Cheney and their disastrous Middle East policy.

How about the TV networks? Have any of them done a single story on their nightly news program about the child molesting priest who is a longtime friend and employee of Rudy Giuliani? Has Brian Williams or Tim Russert or Charlie Gibson or anyone asked Mitt Romney why he never protested his Church's official policy of discrimination against Blacks? It was official policy of the Mormon Church through the 1970s, and Mitt was an adult at that time, fully capable of taking a principled stand. He did nothing. Or how about asking Mike Huckabee to defend his statement that he does not believe in evolution. What about all of his Arkansas ethics scandals? The questions aren't going to ask themselves.

By far, the most lacking in true "fair and balanced" coverage is the Washington Post, which has now sunk to a new low by promoting a right-wing smear on Barack Obama on its front page. In an article entitled, Foes Use Obama's Muslim Ties to Fuel Rumors About Him, the Post uses the tried and true Fox News tactic of turning slander into news by simply prefacing the slander with "some people say" or "opponents say."

In this instance, the slander is the claim (denied by Obama) that Barack Obama is actually a Muslim, despite being a member of a Christian Church, and having no affiliation with any Mosques. (I want to point out here that being a Muslim is not, in and of itself, a bad thing at all. But in the emotionally charged political world we live in, it is being used to make people question where one's loyalties lie.) The article acknowledges it is a rumor denied by the candidate, and offers no proof to the contrary. Here is an example of this fine journalism, "Despite his denials, rumors and e-mails circulating on the Internet continue to allege that Obama (D-Ill.) is a Muslim, a 'Muslim plant' in a conspiracy against America."

Rumors and emails? That is the source?! Rumors started by whom? Who sent these emails? I got an email the other day saying that I could get millions of dollars from a bank in Africa if I only paid a small processing fee. Why is this not front page news? It has just as much sourcing, doesn't it? It's an email, after all. I never went to journalism school like the "article's" author Perry Bacon Jr., but I thought a story required a little more...I don't know...facts.

The rest of the piece is essentially an argument for how a Muslim could never become president of the United States based on poll results gauging respondents' views on Islam and on Muslim politicians. "In an August poll by the Pew Research Center for the People and the Press, 45 percent of respondents said they would be less likely to vote for a candidate for any office who is Muslim, compared with 25 percent who said that about a Mormon candidate and with 16 percent who said the same for someone who is an evangelical Christian."

But Perry, Obama is not a Muslim!! Are you being this stupid on purpose? How are these poll results relevant to Obama's candidacy?

I want you wingnuts out there to remember this story when you try and claim the Washington Post is a liberal paper. As if looking at the editorial page was not enough, now you have 100% proof that the Post takes Republican rumors and legitimizes them. There it is in black and white. Case closed.
Posted by Dave Splash