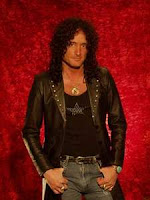 Kevin Dubrow, lead singer of 80's hair metal band Quiet Riot, died yesterday. His body was found by friends in his Las Vegas home. Quiet Riot's 1983 CD, Metal Health, was the first heavy metal album to reach #1 on the Billboard charts. Subsequent Quiet Riot albums failed to sell as many copies or have as much of an impact.