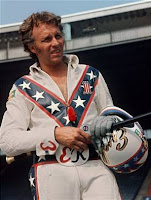 (AP) Evel Knievel, the hard-living motorcycle daredevil whose exploits made him an international icon in the 1970s, died Friday. He was 69.

Knievel's death was confirmed by his 21-year-old granddaughter, Krysten Knievel. He had been in failing health for years, suffering from diabetes and idiopathic pulmonary fibrosis, an incurable condition that scarred his lungs. He had undergone a liver transplant in 1999 after nearly dying of hepatitis C, likely contracted through a blood transfusion after one of his bone-shattering spills.

His death came just two days after it was announced that he and rapper Kanye West had settled a federal lawsuit over the use of Knievel’s trademarked image in a popular West music video.

Immortalized in the Washington’s Smithsonian Institution as “America’s Legendary Daredevil,” Knievel was best known for a failed 1974 attempt to jump an Idaho canyon on a rocket-powered cycle and a spectacular crash at Caesar’s Palace in Las Vegas. He suffered nearly 40 broken bones before he retired in 1980.

For the tall, thin daredevil, the limelight was always comfortable, the gab glib. Always, he welcomed the challenge whether in sports, at work or play. To Knievel, there always were mountains to climb, feats to conquer.

“No king or prince has lived a better life,” he said in a May 2006 interview with The Associated Press. “You’re looking at a guy who’s really done it all. And there are things I wish I had done better, not only for me but for the ones I loved.”

Although he dropped off the pop culture radar in the ’80s, Knievel always had fans and enjoyed a resurgence in popularity in recent years. In later years he still made a good living selling his autographs and endorsing products. Thousands came to Butte, Mont., every year as his legend was celebrated during the “Evel Knievel Days” festival.

He began his daredevil career in 1965 when he formed a troupe called Evel Knievel’s Motorcycle Daredevils, a touring show in which he performed stunts such as riding through fire walls, jumping over live rattlesnakes and mountain lions and being towed at 200 mph behind dragster race cars.

In 1966 he began touring alone, barnstorming the Western states and doing everything from driving the trucks, erecting the ramps and promoting the shows. In the beginning he charged $500 for a jump over two cars parked between ramps.

He steadily increased the length of the jumps until, on New Year’s Day 1968, he was nearly killed when he jumped 151 feet across the fountains in front of Caesar’s Palace. He cleared the fountains but the crash landing put him in the hospital in a coma for a month.

In the years after the Caesar’s crash, the fee for Evel’s performances increased to $1 million for his jump over 13 buses at Wembley Stadium in London — the crash landing broke his pelvis — to more than $6 million for the Sept. 8, 1974, attempt to clear the Snake River Canyon in Idaho in a rocket-powered “Skycycle.” The money came from ticket sales, paid sponsors and ABC’s “Wide World of Sports.”

The parachute malfunctioned and deployed after takeoff. Strong winds blew the cycle into the canyon, landing him close to the swirling river below.

Knievel decided to retire after a jump in the winter of 1976 in which he was again seriously injured. He suffered a concussion and broke both arms in an attempt to jump a tank full of live sharks in the Chicago Amphitheater. He continued to do smaller exhibitions around the country with his son, Robbie.

Many of his records have been broken by daredevil motorcyclist Bubba Blackwell.

Knievel also dabbled in movies and TV, starring as himself in “Viva Knievel” and with Lindsey Wagner in an episode of the 1980s TV series “Bionic Woman.” George Hamilton and Sam Elliott each played Knievel in movies about his life.

Evel Knievel toys accounted for more than $300 million in sales for Ideal and other companies in the 1970s and ’80s.

Born Robert Craig Knievel in the copper mining town of Butte on Oct. 17, 1938, Knievel was raised by his grandparents. He traced his career choice back to the time he saw Joey Chitwood’s Auto Daredevil Show at age 8.

Outstanding in track and field, ski jumping and ice hockey at Butte High School, he went on to win the Northern Rocky Mountain Ski Association Class A Men’s ski jumping championship in 1957 and played with the Charlotte Clippers of the Eastern Hockey League in 1959.

Knievel also worked in the Montana copper mines, served in the U.S. Army, ran his own hunting guide service, sold insurance and ran Honda motorcycle dealerships. As a motorcycle dealer, he drummed up business by offering $100 off the price of a motorcycle to customers who could beat him at arm wrestling.

At various times and in different interviews, Knievel claimed to have been a swindler, a card thief, a safe cracker, a holdup man.

Robbie Knievel followed in his father’s footsteps as a daredevil, jumping a moving locomotive in a 200-foot, ramp-to-ramp motorcycle stunt on live television in 2000. He also jumped a 200-foot-wide chasm of the Grand Canyon.

Knievel married hometown girlfriend, Linda Joan Bork, in 1959. They separated in the early 1990s. They had four children, Kelly, Robbie, Tracey and Alicia.

Knievel lived with his longtime partner, Krystal Kennedy-Knievel, splitting his time between their Clearwater condo and his Butte hometown. They married in 1999 and divorced a few years later but remained together. Knievel had 10 grandchildren and a great-grandchild.