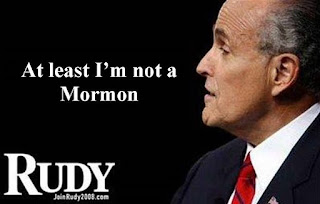 Republican front runner Mitt Romney has stated that he is now imposing a religious test on any Cabinet positions in a Romney administration (perish the thought!). While discussing the issue with conservative commentator Mansoor Ijaz, Romney declared that he would, in no way, place someone who is Muslim on his Cabinet. Rather than calling a spade a spade, and just admitting his bigotry, Romney made it an argument about math.

" ... based on the numbers of American Muslims [as a percentage] in our population, I cannot see that a Cabinet position would be justified," is what he told Ijaz.

The problem with Romney's argument is that according to the most recent data, the number of Muslims in the US is roughly equal to the number of Mormons (Romney's faith) and of Jews. Does this mean that Romney will not appoint any Mormons to his Cabinet? This seems unlikely. Also, I thought that conservatives did not believe in quotas. It appears that Romney is endorsing a quota system for his administration, should he be elected. Considering he has no black people working for him now, he better get to know some because African-Americans make up a higher percentage of Americans than Mormons, Muslims, and Jews combined.
Posted by Dave Splash

Yeah, I heard this today. Romney can be a real idiot sometimes.