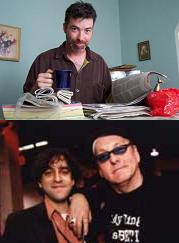 Former model Jeanette Sliwinski was sentenced to eight years in prison yesterday for the 2005 triple murder of three Chicago musicians. According to testimony, Sliwinski was attempting to commit suicide in her car by driving through Chicago's streets at 90 mph, when she struck a car with the three musicians inside.

The three men killed were Michael Dahlquist (pictured, above) drummer for Silkworm, John Glick (pictured, below along with Rick Nielsen of Cheap Trick) guitarist for the band The Returnables (also a friend of mine from Wisconsin), and Douglas Meis, a musician in Chicago.

Somehow, Sliwinski claimed she was not trying to hurt anyone else, yet I find this hard to believe. How else was she planning on killing herself with her car, if she wasn't planning on plowing into innocent drivers? The families of the victims were quite upset by the sentence, especially when it was revealed that she could be released as early as next year if she behaves herself in prison. Ordinarily, I have empathy for suicidal people. But this woman killed three innocent people, and she ended up walking away without a scratch. If she had simply run her car in her garage and inhaled the carbon monoxide, the only person who would have died, would have been her.

Like I mentioned, I was friends with Glick when we both lived in Madison, Wisconsin in the 1990s, and were part of the local music scene. John was a nice guy who knew a lot about music. His band at the time, Fez Petting Zoo, used to play with bands I worked with on a regular basis. Dahlquist's band, Silkworm, was a fantastic indie rock band originally from Seattle. The band had relocated to Chicago to be closer to their record label, Touch & Go Records. A documentary on the band's career is in production, and its website is located here.
Posted by Dave Splash