John W McCain Is The Real Bitch in This Race 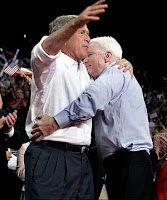 What gets passed off as political discourse among Republicans is pretty pathetic. We all know that none of their sad excuses for candidates stand any chance of getting elected president in 2008. I mean, with the exception of Ron Paul, they are all "stay the course" Bush Republicans. None of them offer any meaningful difference between themselves and W.

Republican primary voters seem to relish in their irrelevance. Most of them ask planted questions about subjects as important as "the terrorist war brought upon us" (a Giuliani fave), increasing the size of Guantanamo Bay, or something about "fiscal discipline." One question that does not need to be planted exemplifies the right's irrational hatred for all things Clinton: "How can we beat the bitch?" This enlightened inquiry came at a recent town hall meeting of John McCain's. How did the "straight talker" respond: "Excellent question." Excellent question?! Then, would an excellent question about Barack Obama be "How can we beat the ni&*er?" I bet that was the next question. Seriously, why do Republicans even get up in the morning?

I imagine they hate the Clintons because they were successful: a booming economy, budget surpluses, a military victory in Kosovo, etc. When contrasted with their hero, George W, the results are pretty embarrassing: record deficits, two lost wars, gas over $3 a gallon and going higher, politicization of the Justice Department, denial of global warming as official doctrine, housing crisis, illegal spying on innocent Americans, etc. I could go on and on. And the best the Republicans have is to call Hillary Clinton a bitch? I can't wait for the 2008 election!
Posted by Dave Splash

If John McCain was truly Hillary's friend he would have given that woman a verbal smackdown.