Is Courtney Hazlett Another Bushie Fembot? 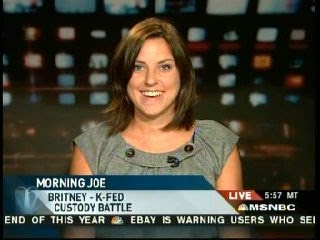 Every weekday morning, I usually catch the last 30-40 minutes of MSNBC's Morning Joe program before I head off to work. The end of the show is usually less political, and more focused on entertainment and pop culture. This is, of course, a welcome change from having to hear the show's host Joe Scarborough (a former Republican Congressman) pretend he is not some detached, Bush loving, rabid wingnut. He tries to deflect his true nature with his sense of humor (much as Tucker Carlson does), but it always slips out as he is barely able to contain his contempt for all things Democrat.

Anyway...I was watching this morning when Morning Joe's new "pop culture" reporter, Courtney Hazlett (who I must admit I find somewhat attractive), delivered a harsh hit piece on author Stephen King. In an interview with Time magazine, the legendary author recounted a conversation he had while on Nightline about President Bush's endorsement of torture. "So I said something to the Nightline guy about waterboarding, and if the Bush administration didn't think it was torture, they ought to do some personal investigation. Someone in the Bush family should actually be waterboarded so they could report on it to George. I said, I didn't think he would do it, but I suggested Jenna be waterboarded and then she could talk about whether or not she thought it was torture."

To me, King's comments are perfectly reasonable. He wasn't really suggesting that Jenna Bush be waterboarded, he was making a larger point about the Bush administration's disregard for the typical standards of decency when questioning criminal suspects, and their refusal to even consider whether or not they are wrong, or tarnishing the reputation of the United States in the international community. But was that what he was really talking about or was there an even larger point?

Hazlett responded with a stinging personal attack on King. She claimed his book sales are in the toilet, and that the last movie adaptation of one of his novels opened with only an $8 million weekend. Putting aside the fact that King generally has little to do with the movies made of his books (as is the case with most authors), what do his book sales have to do with his point? This is a typical Bushie "attack the messenger" tactic that has been employed by the likes of Karl Rove for the last eight years. She never even addressed his actual point. But, I guess when you are pitching for the Bush team, that is not exactly necessary. If you make King look like a desperate, attention seeking loon, then you don't have to really talk about what he actually said.

More important than his comments on waterboarding, King was actually making a larger point on the media's misplaced priorities. He sarcastically suggested that Lindsey Lohan be named Time's "Person of the Year" because that is who the media spends all their time covering. Again, a perfectly reasonable point. This is likely what got Courtney's panties in a bunch. He was criticizing news outlets for employing people like her, instead of people like Richard Engel.

Courtney, stick to cutesy gossip stories about Britney Spears and Anna Nicole, and leave politics to someone with a clue. I wish I didn't know about your Republican leanings, because now it will be hard for me to like you.

Ms. Hazlett's online column about King can be found here. Again, I implore you to find Courtney's point anywhere.

UPDATE: Former Bush Attorney General John Ashcroft has volunteered to be waterboarded. I say, we take him up on that offer.
Posted by Dave Splash

At best, Courtney is a dolt (really, is what she has and what she does for a living, really a job?) and represents the Return of Repressed: she looks like she can only say the term (forget about give a) "blow job" when she's drunk or hungover: did you see her morning after report this week, from Hollywood, where she was clearly straining to remain semi-coherent?

At worst, she'll still have a job come the 'morrow.

And, Willie Geist (think he had any inside help getting his job?)looks like he's got a boner for her, every time they show the two together.

Hey, I have a boner for her. That's no big deal to me. I just did not like how she personally attacked King just because he said something negative about the Bushes.

I am saddened that she is a Republican. I had high hopes for her.

I had high hopes for my butt.

All good-looking, educated women with class are Republicans. What would she want with some guy like you wearing a pink polo with the collar popped. She dates real men--those who fight wars; not those who sit at home playing on their itsy bitsy piece of the internet. Man-up, little fella.

Yeah, and it screams toughness for you to reply anonymously to a blog posting from six months ago,eh Rambo?

i always thought willie wanted to hump er too. But she is ugly. big nose, no lips and muffin jaws. maybe he knows whether or no she has bj skilss from the last msnbc xmas office party.

She always seemed pretty pleased with herself - always a telltale sign that someones a GOP.
She's phenominally lackluster - take away MSNBC's army of makeup staff and Courtney is another unfortunate looking girl whose features will not age well.
Plus - she seems to be all hot and frothy for Willy Geist - who's a Tucker Carlson apple polisher, and a failed GOP talk show host.

Courtney -
You do not understand why Ringo Starr has had enough. So, I will explain. Since you are young, you do not yet realize that as we get older, we come to grips with the fact that time/life goes by very quickly. The more pies we have our fingers in, the more things we have to commit our time to, and the less time we have for the things we want to do. It does not mean Ringo no longer appreciates his fans, it simply means he can't keep wasting his time on people that need to "get a life" anyway. Let the guy have some peace. Does he have to answer fan mail right up until the moment they put him 6 feet under? Everyone should be allowed to retire.

Courtney -
In my last comment, I forgot to add: YOU'RE HOT! Wish I could take you to dinner.

windowless is so right about her not aging well, you should see her mom, she looks like a horse...and you are right, she is so die hard republican

by the way, anyone notice those CANKLES...scary

I wouldn't have posted about her if I didn't think she was hot. I disagree with her politics, but I would bang the hell out of her without question. Cankles? I don't think so.

dave, unfortunatly you have never seen her up close...yes, cankles like my 80 yesr old grandmother

Courtney is no more than a common whore. She's just been sleeping around to get more air time. I know for a fact that this absolute idiot only has her job because shes been sleeping with some nbc married executives. But what they don't know, is that she has a big mouth and has been bragging about it. She's also a racist pig I've personally heard anti-Semitic comments from her drunken mouth, not to mention the N- word in regards to Obama. She's an ugly alcoholic with no talent, a complete moron. Shame on you MSNBC for having such poor judgment in hiring such an indecent human being to represent you.

to Annonymous who posted on Feb 5, 09. I wish I could meet you. Im sure we could exchange some stories that would make our heads spin. I didnt know she was carrying on with her old way at MSNBC too. You hit the nail right on the head with ALL of your comments.

Uh... you people truly are disgusting idiots. A common whore? A Drunk?

Unfortunate Looking because she hasn't had piles of silicone stuffed into her chest like the other cable network celebs ?

Courtney Hazlett has a MASTERS DEGREE FROM COLUMBIA in Journalism. DO YOU HAVE ANY IDEA how difficult that is to achieve? Didn't think so. Average students don't get in to, much less graduate from Columbia.

Ok this is to anonymous who posted on August 25. What does someone's degree have to do with their character? So disgusting idiot is laughable. None of that takes away from her rude personality and her racist ideals. Looking through the blog responses there are multiple different sources citing her destructive verbal assaults on black individuals. Not only are there many cites stating her extreme promiscuous behavior throughout her industry by coworkers and superiors. There were also several reports done by Page Six and one in particular called "Gag Yourselves" that highlights her lack of moral behavior. Also on July 10th there is "Just asking". However I am not basing my comments on these articles alone, but also through my personal experiences with her that I now do regret. She is a nasty drunk, and oh yes a whore, end of story.

What's a masters degree in journalism mean anyway? -- or a bachelor's degree in the same? -- journalism is an on-the-job-training profession. J-School is a Joke. That's what the J stands for. Didn't Alaska's ex-governor go to J-School at some rinkydink college?

Most of these comments are incredibly lame, and seem awfully personal. But the one about Alaska's ex-governor going to Journalism School was hilarious. So true. And if she could do it, definitely anyone can.