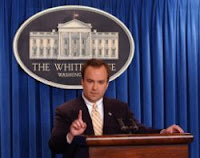 Well, it's about freakin' time someone in the Bush Administration told the truth about something! In this case, it is a former member of the administration. Former press secretary, Scott McClellan, has written a new book about his time in the White House, and in it, he addresses the administration's intentional leaking of the name of an undercover CIA operative - Valerie Plame. McClellan says in the book that President Bush himself told him that no one from the administration was involved in this potentially treasonous activity. This was a lie. "I had unknowingly passed along false information. And five of the highest ranking officials in the administration were involved in my doing so: Rove, Libby, the vice President, the President’s chief of staff, and the president himself."

Is it time for McClellan to be destroyed by the right for speaking up? Looks like it.
Posted by Dave Splash

Ah, isn't it amazing how these weasels refuse to speak up when they're in the middle of the situation but gladly tell all when they can make a buck on a book?

At least he's not waiting until after Bush's term is up.