The Eagles latest can only be purchased at Wal-Mart 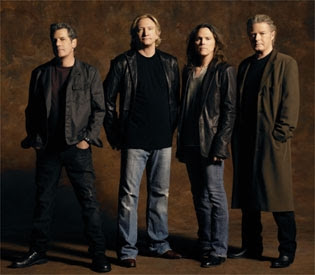 ...thank god.
At least I won't have to worry about this CD taking up valuable inventory space at Homer's. Plus, it'll be confined to a place where I know I will never visit.

A few days ago, I was driving to San Diego Taco and I heard "Life in the Fast Lane" on Z-92. My knuckles started to whiten. My blood was a bit hotter than it was when I was listening to Radiohead's latest. For some reason, The Eagles are just one of those bands that I instinctively hate - for no apparent reason. Sort of like Dane Cook.

Maybe it just brings back memories when I was growing up and seeing my hopped-up, long-haired cousins working on their beat-up cars on the Fourth of July and hearing them tell my five-year-old ass to "scram" when I was trying to see what they were working on.

Or it could just be that the Eagles represent the worst stereotypes of classic rock.

Resident liberal Don Henley justified the exclusive Wal-Mart deal by saying Wal-Mart is doing good with the environment and Wal-Mart isn't any more evil than a record label. I dunno, when it comes to locking in illegal entrants after hours, driving down wages in already blighted areas of rural America and elbowing out competition, RCA has nothing on Wal-Mart.

UPDATE by Dave Splash: Apparently, the right wingers at News Busters are flaming mad at The Eagles new album because they mention global warming, and "Not a word about Islamofascists trying to blow us all up, though. Nothing about bin Laddenists cutting off people’s heads, women being stoned, young girls being murdered with 'honor killings,' or homosexuals being summarily executed from our pals the Eagles! I guess they have forgotten about 9/11 and our enemies in radical Islam like so many of their ilk." Maybe I misjudged The Eagles. I mean, if the wingnuts get this upset about them, maybe there is something to that bland background music!
Posted by Dave Splash

Email ThisBlogThis!Share to TwitterShare to FacebookShare to Pinterest
Labels: The Eagles, Wal-Mart

The Eagles are perhaps the worst band ever. I loathe them. I could not ingest enough drugs to make that music enjoyable.