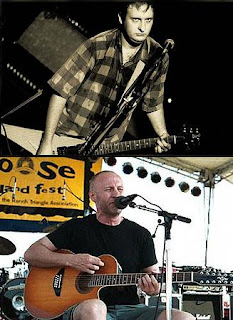 Reuters has a new interview with Bob Mould. He has been one of my favorites for going on 20 years. Like it says in the piece, many of his longtime fans (myself included) have not been digging the music he has been making lately. Bob became interested in electronica over 10 years ago, and its influence began slowly creeping into his music. His 2002 album, Modulate, was almost entirely electronic, and his collaborative DJ effort called Blow Off, was as well. I hated both of them. It seemed to me that while Bob was intensely interested in this style of music, he did not possess the same level of talent and artistic skill that he does for creating catchy guitar rock songs (his stock and trade for 27 years). I wonder if fans of electronica felt the same way.

Bob Mould's last album, 2005's Body of Song, was pretty good. He attempted to mix his electronic and organic styles. I liked about half of the album. Apparently, Bob has heard the complaints from his fans and has responded. In the interview below, he discusses his next album, and says that it is more organic. I guess we'll have to wait and see. In the meantime, he has a new DVD coming out.

I posted about his new retrospective concert DVD a few months ago when I first heard about it. Now, it is on the verge of release. Circle of Friends features a concert from 2005, and during it, he performs songs from all eras of his career. Should be interesting.
----------------------------------------
Rocker Bob Mould finds balance of rock and electro
(Reuters) For more than 25 years songwriter, performer, producer and DJ Bob Mould's sound has crossed hardcore punk, melodic guitar-based indie music and electronica, with fans coming and going along the way.

Now with his first DVD release and a new album on the way, he says he has struck a balance between his different styles and ended up in a pretty good place.

"Right now I think I have a fairly healthy blend of where I think I'm composing less in the electronic side and more on the organic side," Mould told Reuters in an interview.

"I think that the blend is a lot more acceptable to other people and I'm having a lot of fun with it."

As the co-singer and songwriter of thrash punk band Husker Du in the 1980s, the face and voice of 1990s alternative rock band Sugar, or through solo projects, 47-year-old Mould became synonymous with angst-ridden guitar rock and the alternative rock scene.

Mould's DVD, "Circle of Friends," documents a show from a 2005 tour at the 9:30 Club in Washington, DC, where Mould revisited songs from all of his different recording incarnations with a full band.

Mould describes the album as having 10 songs, "a lot of guitars, some electronic embellishments," and one mainly electronic song.

His 2002 release, "Modulate," experimented with an electronic sound that caused some of Mould's rock fans to revolt so he has moved back to more guitar based music although not abandoning his electronic interests.

Mould's music has influenced a number of other bands and his sound can be heard in the melodic noise blend of Nirvana, speedy pop punk of Green Day, and punk melodic mix of the Foo Fighters, to name a few. It's a sound print Mould enjoys.

"I typically like it when I hear it because I can sort of tell where it came from and it's nice," he said.

Some bands mining his guitar sound may, however, have focused too much on image rather than the spirit of the song into which Mould wraps social as well as personal themes.

"There was a couple of years where there was sort of mall punk stuff, where I was like wow, you're really missing the point here," Mould said.

"Green Day is an amazing band, but it's sort of like the bands after them that wore the eyeliner and played fast and shopped at Hot Topic, that was more important than trying to sort of raise a social consciousness or trying to create something new."

Mould, meanwhile, continues to work at perfecting his songwriting.

"I learn more and I learn the craft better each time, and I'd like to think that every five or six songs I've written something that's a little bit better," he said.
Posted by Dave Splash