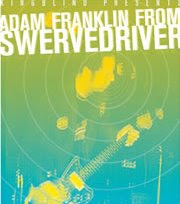 The next two weeks are pretty crowded on the Omaha concert calendar, and I am worried that one particularly special concert may get overlooked. That show is the Adam Franklin show on Tuesday night at Waiting Room.

Adam, as you no doubt already know, was the lead singer and guitarist for 90s British rockers Swervedriver. I love Swervedriver's music more than words can say. For a time, they epitomized pretty much everything I liked about rock music: lots of distortion, lots of noise, and nice, catchy pop songs buried beneath the chaos. No one did it better than Swervedriver. That important band broke up (or went on "hiatus") in 1999, and since that time, Adam Franklin has been recording and touring using the name Toshack Highway. He explored some quieter sounds, with more acoustic based music. He also began adding elements of ambient music to his palette as well.

A few months ago, Franklin released his first album under his own name, Bolts of Melody. To many -- myself included -- it signals a return to the "Swervedriver sound" or a more aggressive, guitar based sound. I love it! He is currently in the midst of a nationwide tour promoting the album. Check the tour dates here.

As I mentioned, Adam plays in Omaha Tuesday night. I implore you to attend. Tickets are a mere $10 and are available here. This will be the first time he has ever played in Omaha, and I don't want to be embarrassed. C'mon people!!

To get yourself primed for the show, check out my all Swervedriver and Adam Franklin podcast here. That should wet your appetite for the concert. Don't miss this show, it could be the sleeper show of the year.
Posted by Dave Splash