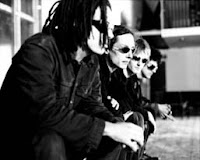 Got this bulletin sent to me today on MySpace:

"After almost a 10-year long absence, the revered UK band SWERVEDRIVER plans to reform for an early 2008 worldwide tour. Swervedriver is Adam Franklin on guitar and vocals, Jimmy Hartridge on guitar, Steve George on bass, and Jez on drums. Swervedriver formed in Oxford, England in 1989 and released a series of EP's followed by their debut full-length, Raise, in 1991 on Creation Records in the UK and A&M Records in the U.S. Mezcal Head followed in 1993, then in 1995 Ejector Seat Reservation came out on Creation in the UK, but was only available as an import in the US. Their last release, 99th Dream, was released by Zero Hour in 1998. Tour dates for Swervedriver will be announced shortly. Adam Franklin is in the midst of a U.S. solo tour in support of Bolts of Melody, which was released this past June on Hi-Speed Soul."
Posted by Dave Splash

Email ThisBlogThis!Share to TwitterShare to FacebookShare to Pinterest
Labels: Swervedriver