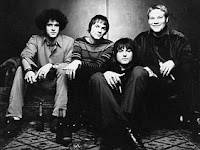 I'm back from my weekend trip to Chicago for the Superdrag reunion. The show was a fun trip down memory lane, but was a little underwhelming in all honesty. Superdrag was a big band for me in the late 90s, and their 2nd full-length, Head Trip in Every Key, is one of my favorites of all time. I was able to see the band a number of times between 2000 and 2003, when Superdrag was a trio. I was never able to see them in their original, four-piece incarnation. So, for that reason, this was a unique experience for me.

It was fun seeing all the guys together again, but the show was paced very poorly. They started out by playing six or seven songs in a row from their "hit" album, Regretfully Yours. It wasn't until midway through the show before they played anything from Head Trip. Once they did, the crowd got more enthused, and the band got tighter. The encore included tunes from their first EP, and one song from In The Valley of Dying Stars, which was from the trio-era of the band's career. Interesting choice.

All in all, it was a good time, and I'm glad I went. Superdrag is only playing in DC, New York, and their hometown of Knoxville, TN before calling it quits for good.
Posted by Dave Splash