Joe Lieberman Sells Out Again - This Time His Religion 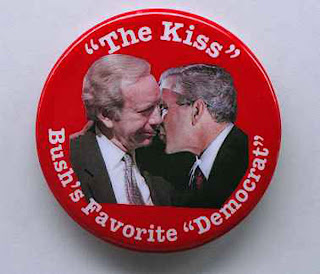 There is no end to the disgusting decline of former Democrat Joltin' Joe Lieberman. It was pretty bad when he refused to accept that his constituents in the Democratic party of Connecticut wanted someone else to be their Senator, and ran against the Dems (with support from the GOP and Karl Rove). It has been pretty hard to take the former VP candidate as he votes nearly 100% with the Republican party (more than most actual Republicans) in the Senate. But now he has gone beyond selling out his constituents and his party. He is selling out his religion (something he claims to care about quite a bit).

When Republican presidential hopeful John W. McCain said recently that he could only support a Christian president, because the US is a "Christian country" it caused outrage among many Jewish groups (including the Anti-Defamation League), and among those who support the Constitution. In typical fashion, the Christian Coalition applauded the remark, and now say he has what it takes to be president (assholes). McCain re-pandered, and attempted to "clarify" his remarks with some nonsense about being taken out of context. Uh-huh.

Lieberman, an Orthodox Jew, didn't need any "clarification." Since the words came out of a Republican's mouth, it must be true, and therefore only the enemies of America would dare question or challenge the statement. Right, Joe. Says Mr. Lieberman, "I have known John McCain very well for many years and I know that he does not have a bigoted bone in his body. I know that he is fair and just to all Americans regardless of their faith." Except, of course, when pandering to the religious extremists that make up the "Republican base." (Note to wingnuts: throwing the word "Judeo" in front of things -- i.e. Judeo-Christian -- does not make it any less offensive or more accurate. The US is not a Christian country, it says so right there in the Constitution. You might want to read it some time)

My hatred for Joe Lieberman is palpable. He is almost singlehandedly the reason why nothing substantive can be done to end the debacle in Iraq. His constant threats to leave the Democratic caucus over bills he does not like, would change who holds the majority in the Senate. He is holding the Democratic agenda (you know, the one the American people voted for in 2006) and party hostage to his ego, plain and simple. If that is not reprehensible behavior, I don't know what is. While Joe is accumulating accolades and high-fives from Ann Coulter, Rush Limbaugh, Sean Hannity, Karl Rove and others, he is allowing whatever shred of dignity he once had to be lost. Lieberman also said he might support a Republican for president!

The biggest mistake ever made by Al Gore was elevating this jack-ass to national status by selecting him as his running mate in 2000. The only way to rectify this is to kick Lieberman out of the Democratic caucus. He is a double agent, who is likely feeding Democratic strategic secrets to the GOP. I'd like to have it done immediately, but I understand that this cannot be done until after the '08 elections when the Dems pick up enough seats to increase their majority. It must be done, however. Lieberman is holding the nation hostage with his arrogance, and he must be put back in his place.
Posted by Dave Splash