Gerald Ford: What a Gutsy and Observant Guy! 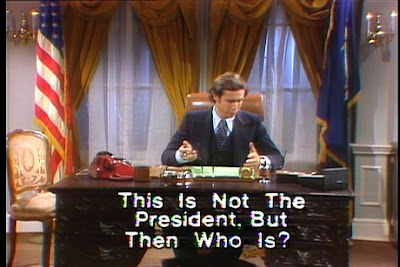 So there's this new book out by political writer Thomas DeFrank that details a number of private conversations between himself and former Pres. Gerald Ford (president for 5 minutes in the 70s some time). Ford, you remember, is the president who was never elected as either president or vice president, who presided over the disastrous withdrawal from Vietnam, and who pardoned Richard Nixon. I know -- a genius, right?

Well, in this new book, Ford (who asked that his brilliant commentary only be published after he was dead) trashes -- wait for it -- Bill Clinton. Yep, the usual Republican whipping boy. He calls him a "sex addict" and a "skirt chaser" (again, his insight is amazing), but has nothing positive to say about the 8 years of economic prosperity and peace that occurred under Clinton's watch. Naturally, that does not fit the pre-assigned Republican storyline.

What does he say about the current dipshit sitting on Pennsylvania Avenue. I wouldn't know, because the media is so in the bag for Bush, that all they talk about is Ford's criticism of Clinton. Nothing about starting (and losing) a war against the wrong country, nothing about the disastrous economy, nothing about decimating the 4th amendment and habeas corpus, nothing about legally sanctioning torture, nothing about turning the Justice Department into a wing of the White House, nothing about Bush "deciding" that Congressional oversight is a nuisance and not part of the Constitution. Nothing about nothing. God forbid, the media might want to focus on something important rather scandalous comments about a successful president from a dead guy who was president for a matter of minutes during one of America's lowest points.

Maybe it's just me.
Posted by Dave Splash